The fur issue is one of the easiest moral questions to settle. The animals are killed only for human adornment, often in particularly horrible ways, and there are functional and fashionable alternatives. If our societal standards against needless cruelty mean anything, they should be applied to the actions of this industry. There can be no rational defense for wearing the fur of other creatures. 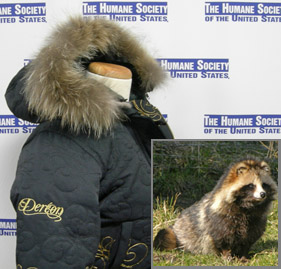 Amazingly though, the industry continues to succeed in selling pelts and making money, even though the cruelty is obvious and the alternatives are abundant. And that indifference has been even worse when talking about fur trim—the little bit of fur that is stitched on to hoods or boots or gloves. Many consumers often don’t even know what they are buying. Or they think that a little fur trim is benign in its effect.

But a recent HSUS investigation finally shook up the public and caused consumers to take note of the cruelty of fur trim. We tested a sample of 25 fur-trimmed jackets from a variety of designers and retailers and every single one was falsely advertised, falsely labeled or not labeled at all.

Most of the jackets contained fur from domestic dogs or raccoon dogs. Some of these jackets were advertised as "faux fur" and were actually made of real animal fur. Others were labeled as a different species of animal, such as raccoon, rabbit or coyote. In all cases, consumers had no idea what they were really getting.

The results of this investigation were reported on "The Today Show," "Good Morning America" and other major U.S. media outlets, and sent many retailers and designers scrambling. Most were not paying attention to the sourcing or species of fur trim they were selling. We communicated with all the companies in question, and urged them to drop all fur trim completely from their product lines.

© The HSUS/Karremann
Dogs raised for their fur in China.

Most fur trim comes from China, a country with no animal welfare laws. The killing is grotesque. Our investigators have been to the fur factories, and we’ve seen the appalling ways the animals are treated. Given the lack of regulation, designers and retailers simply can’t have confidence in what they’re getting. The pet food recall surrounding melamine added to pet food is a further reminder of the difficulty in regulating the conduct of Chinese companies. Best not to deal with these fur traders at all, we advised.

As a result of our investigative work and outreach, several companies—Calvin Klein, Tommy Hilfiger, and Foot Locker—have agreed to phase out all animal fur. This was the best course of action, and these companies received the highest level of praise from us.

Others haven’t gone quite as far yet, but we have offered some encouraging words nonetheless. DKNY, Sean John, Rocawear and Michael Kors have pledged not to use raccoon dog fur in the future. Burlington Coat Factory, Loehmann’s and House of Deréon have endorsed H.R. 891, the Dog and Cat Fur Prohibition Enforcement Act, which would require labeling of all fur-trimmed apparel and ban the sale of raccoon dog fur in the United States. While these companies have not gone entirely fur-free, which is what we aggressively advocate, we’ve opened a dialogue with them. We will continue to urge them to reconsider their broader fur policies, and we hope that they will eventually drop fur from their product lines.

Last week, when we announced that Foot Locker has completely given the boot to fur, we also thanked Michael Kors for pledging to stop using raccoon dog fur. PETA was not very happy with this announcement, and says we were wrong to offer encouragement to Michael Kors because the company hasn’t gone far enough.

© Lauri Sippu
Raccoon dogs, members of the canine family with raccoon-like
markings, are skinned alive for their fur in China.

Let me emphasize that we are urging all designers and retailers to go fur-free. But even if companies are not entirely where we want them to be, we still talk to them in a constructive way. Change is often a process, not an event, and we want these companies to walk farther down the path with us. By banning the sale of an entire species of animal—the raccoon dog, for example—companies are taking a step and acknowledging that the animals matter. Investigative footage has shown that raccoon dogs suffer significant abuse; the animals are beaten over the head and then skinned alive for their fur pelts.

There is another class of designers and retailers who were implicated in the false advertising and false labeling scandal who have not taken any appropriate action to protect animals and consumers from this cruel deception: Andrew Marc, Baby Phat, Barney’s, Bergdorf Goodman, Bluefly, Dillard’s, J.C. Penney, Lord & Taylor, Macy’s (Federated Department Stores), Neiman Marcus, Ross, and Spiewak. The HSUS filed a petition with the Federal Trade Commission, urging the agency to take action against these companies. The FTC has alerted us that it has referred the matter to its enforcement division. We will continue to press these companies to revisit their fur policies, and we will continue to urge the FTC to enforce the law against those who do not take corrective measures.

You can learn more and take action at The HSUS’ Fur-Free Campaign website. Ask designers and retailers to go fur-free and to stop selling fur trim, and ask your U.S. Representative to support H.R. 891, which would require clear labeling of all fur-trimmed garments and stop the sale of raccoon dog fur.

At The HSUS, we use the carrot and the stick. We are not afraid to use either one, and we believe that the careful use of both is the best tactical approach in putting an end to the grisly business of killing animals for their fur.