There have been some signature wins in state legislatures this week—particularly on two of the worst forms of animal abuse The HSUS has been campaigning to stamp out through the law.

First, on Tuesday, in the Louisiana Senate, lawmakers passed an immediate ban on cockfighting by a staggering vote of 34–4. The politics of this issue have entirely flipped in the state, and only the most hardened pro-cockfighting lawmakers can stake out a position favoring continuation of the barbaric practice of staged animal fights.

The anti-cockfighting campaign in the legislature has been championed by state Senator Art Lentini (R-Metairie)—one of the most articulate and clear-thinking lawmakers I have come across. As you may know, Louisiana is the only state in the nation to allow legal cockfighting. He has masterfully dissected the arguments of cockfighting advocates at every step of the process, and the votes he has garnered for his legislation are a testament in part to his skills and tenacity.

The Louisiana House also passed an anti-cockfighting measure, but they postponed the effective date for 14 months and inserted devastating amendments to the state’s anti-cruelty statute. The HSUS favors Lentini’s Senate bill, and we will be working for the adoption of the stronger provisions as the issue moves through the process. 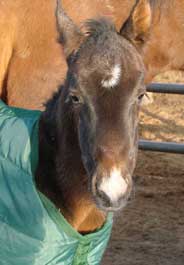 © Fair Dinkum Farm
Willie, a foal born days after his blind
mother was rescued from the Cavel
slaughter plant by The HSUS.

Meanwhile, in Illinois, the state Senate approved a ban on the slaughter of horses by a commanding vote of 39-16. The state House passed the exact same bill two weeks ago by a wide margin, too, and the bill now goes to Illinois Governor Rod Blagojevich for his signature. Blagojevich is one of the nation’s most pro-animal chief executives. He has worked hard to get this done and he has pledged to sign the bill as soon as he gets it.

Special thanks also go to Illinois Rep. Bob Molaro (D-Chicago) and Senator John Cullerton (D-Chicago) for leading this fight and getting the job done. The legislative win they have engineered is far more than a symbolic victory. Illinois has the last operating horse slaughter plant in the United States (Cavel International in DeKalb), which kills tens of thousands of healthy horses a year. This bill will shut down this abominable business in the state once and for all.

Some people say individual actions don’t make a difference. They are wrong. And some people also say that all politicians are the same. They are wrong about that, too. The Art Lentinis, the Bob Molaros, the John Cullertons and the Rod Blagojevichs are living proof that our nation benefits from having principled, caring lawmakers serve in public office.