The First Amendment protects speech. It does not protect criminal conduct. So you have to wonder why on earth Amazon.com, the retail giant, insists on trafficking in criminal materials in the name of “free speech.” 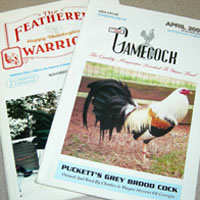 Yesterday, the Humane Society amended its complaint filed in federal court against Amazon over the company’s sale of materials that advertise animal fighting paraphernalia and fighting birds. The Feathered Warrior and The Gamecock—both published in Arkansas—may not be on your reading list, but for thousands of lawbreakers they are must-reading. In fact, these journals of the blood sport are often among the top 500 sellers in the magazine category at Amazon.com, which is apparently the only online retailer that will have anything to do with them.

At last count, Amazon was selling 27 books, monographs and magazines all about cockfighting. If your passion in life is watching two tormented birds tear each other to pieces, in a bloody pit surrounded by shouting gamblers, Amazon is the place to go.

Two of these publications in particular should have set off alarm bells in the Amazon legal department, since from cover to cover they are filled with specific criminal solicitations. In the past year or so, Feathered Warrior and Gamecock have carried no fewer than 1,000 pages of ads soliciting specific illegal acts, mainly the purchase and sale of fighting birds and cockfighting implements.

A recent edition of Gamecock even advertised the sale of an illegal cockfighting arena in rural Kentucky—where HSUS investigators went undercover at the Saturday night cockfights and found a mob of hundreds staging fights between animals. As usual in these spectacles, razors were attached to the birds’ legs to maximize the bloodletting, the roosters were drugged to heighten their aggression, and bets ran in the thousands of dollars.

These sharp blades are fastened to chickens’ legs during fights.

The Animal Welfare Act, amended in May after President Bush signed a bill to strengthen the federal law against animal fighting, makes it a federal crime to sell fighting birds or cockfighting implements across state lines or to ship them out of the country, or to ship materials that promote animal fighting. But you’d never know that by perusing these offerings at Amazon.

The company’s lawyers have strained to find refuge in the First Amendment. But their argument confuses the expression of an opinion with the solicitation of a crime—a point easily settled by comparing Amazon’s policies on cockfighting and on narcotics trafficking.

Amazon sells High Times, a magazine that argues for the legalization of drugs. In its pages you will find plenty of editorial comment about the legalization of narcotics. All of that is protected speech, as would a journal advocating that cockfighting be legalized, and no one would quarrel with the sale of such magazines.

What you will not find in High Times, however, or in any other publication available at Amazon.com, are mail-order advertisements for the sale of narcotics. You won’t find a methamphetamine lab for sale, either.

None of these items are advertised in materials available on Amazon, nor are solicitations from child pornographers to be found on the site. Of course not: They are crimes, and Amazon is not in the business of abetting them. Indeed, this is a company that prides itself on going even further than minimal legal requirements, and claims the right to unilaterally remove any item it sells without explanation—a right it has exercised by declining, for example, to sell certain objectionable or sexually explicit materials even if they might qualify as protected speech.

So why, in the case of animal cruelty, has Amazon suddenly decided that anything goes, and one man’s criminal solicitation is another man’s “protected speech”? Since when does any company get to decide for itself which crimes are worth enforcing, and which laws it will take the trouble to respect?

The HSUS has reminded Amazon officials that across America police are trying to crack down on illegal cockfighting—and it hardly helps law enforcement agencies when Amazon serves as a national courier for the cockfighting subculture. We also informed them that their decision to disobey and question the constitutionality of a new federal law that makes trafficking in fighting animals and cockfighting implements a federal felony could have far reaching impacts on law enforcement efforts to crack down on the violence, drug trafficking and other criminal conduct that swirls around the illicit cockfighting rings of this nation.

So far, all of these appeals to corporate responsibility and the rule of law have come to nothing. Cockfighters do not have many apologists left in America. Yet somehow Amazon has found itself as their champion.

Litigation is underway, to hold the company to lawful standards. Yet it can still be resolved if Amazon’s founder, Jeff Bezos, will step in and make it clear that his company will not violate federal animal cruelty laws. He has built an otherwise fine company, and now its good name is at risk. Mr. Bezos was once named “Man of the Year” by Time magazine.  He might want to act quickly, before he earns the same honor from Feathered Warrior.

Take a moment if you would and write to Mr. Bezos and urge his company to stop enabling the animal fighting industry and come into compliance with federal law.