Our ideas about protecting animals were once at the margins. Now, they are in the mainstream.

More than ever, Americans and American institutions are embracing the protection of animals as a personal and societal responsibility, and the evidence is all around us. 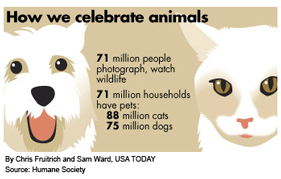 Today, The HSUS is being honored by USA TODAY as one of 25 charities to participate in USA TODAY’s 25th Anniversary Celebration and its "Spirit of the USA" charity program. We are profiled in today’s paper with a snapshot (at left) on the front page of the print edition, on the front page of usatoday.com, and in advertisements in the paper and online. Thank you USA TODAY.

If you have a chance, pick up the paper and check it out, and please post a comment at humanesociety.usatoday.com.

It’s exciting to have America’s largest newspaper recognize us. But there are many other associations that we are proud of, too.

We are also pleased to be one of 10 organizations Microsoft has chosen to benefit from its recently launched i’m™ Initiative—an instant messaging program. Every time you have a conversation using i’m™, Microsoft shares a portion of the program’s advertising revenue with The HSUS. Microsoft has guaranteed a minimum contribution of $100,000 to The HSUS, but there is no cap on the amount the company will donate. Bank of America is another corporate supporter. The HSUS’ credit card affinity program generates significant funding for our animal protection programs, thanks to more than 60,000 card holders. The HSUS gets a donation from Bank of America for every new card opened and then gets a small portion of every purchase. (By the way, if you don’t have an HSUS affinity card and want one, you can sign up online right now.)

There are other measures of common sense, mainstream progress too.

Just yesterday, we saw evidence from around the country of lawmakers embracing our cause.

On Thursday, in Congress, the Senate Appropriations Committee approved an HSUS-backed amendment to protect polar bears—perhaps the iconic species for the effects of global warming—from needless killing. Senator Jack Reed (D-R.I.) offered an amendment to ban imports of polar bear heads and hides taken by American trophy hunters in Canada. Appropriations Committee Chairman Robert Byrd (D-W.Va.) and Subcommittee Chairwoman Dianne Feinstein (D-Calif.) helped Reed push the amendment to passage, which had a great assist from Pennsylvania’s Arlen Specter (R-Pa.). With polar bears facing threats to their very survival, they do not need additional killing for such a frivolous purpose—for simply a head-hunting exercise by American trophy hunters.

In Louisiana last night, House lawmakers followed the lead of the Senate and banned gambling at cockfights. The bill was introduced by Senator Art Lentini. Banning gambling at the fights eliminates one of the two major motivators for participation in the practice—the other being a lust for bloodletting. Now, we continue the fight to ban the cockfights themselves and make Louisiana the 50th state in the nation to outlaw this form of staged animal cruelty.

And finally, in New York yesterday, the state Assembly followed the lead of the Senate and passed a bill to ban electrocuting fur-bearing animals on fur farms in the state. It’s the first time a state legislature has banned this inhumane method of killing. Thanks there go to Assemblywoman Deborah Glick and Senator Frank Padavan—both stalwart advocates for animals.

Take stock of this. Animals are part of the policy debate in Congress and in state legislatures around the country, and we are winning. And never before could you send an instant message or make a credit card purchase and make a difference for animals. Now you can.

I am hopeful. Our cause is ascendant.

Take a moment to celebrate. And then once you do that, get busy again by helping animals.

You are not alone. You are part of a larger social movement, and when we act in concert, the results are tangible and inspiring.