Section 123 of Title I of the Farm Bill is the most worrying legislation you’ve never heard of. Slipped into an early draft of the Farm Bill written by the House Subcommittee on Livestock, Dairy and Poultry, this section threatens to nullify dozens of animal welfare laws enacted through democratic decision-making at the state and local level. 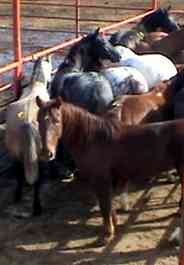 © The HSUS
Horses bound for slaughter.

Section 123 specifies that "no State or locality shall make any law prohibiting the use in commerce of an article that the Secretary of Agriculture has (1) inspected and passed; or (2) determined to be of non-regulated status."

Thus, if the U.S. Department of Agriculture has any regulatory program for any animal product or industry, state laws that restrict that activity would be voided. For instance, because the USDA inspects horse meat under federal food safety and slaughter laws, Section 123 would strike state laws against horse slaughter in California, Illinois, Oklahoma and Texas. Slaughter plants would resume operations in Illinois and Texas, even though the states’ lawmakers voted to shut down these operations as cruel and inconsistent with the values of the people of their states.

The recently approved laws in Arizona, Florida and, just last week, Oregon to ban gestation crates could also be eliminated, since the federal government inspects pork products. California’s legislation against foie gras production, and Chicago’s ban, too, would be scuttled by Section 123.

Indeed, the wording of the proposed section, which prohibits state laws on any article that the Secretary of Agriculture has "inspected and passed," is so broad that it could be used to threaten animal welfare laws that do not relate to food production.

Puppy mills, intensive breeding operations where dogs are packed in cages, are also subject to federal inspection requirements, so state laws imposing standards on puppy production would be on the chopping block. Restrictions on breeding, selling and owning exotic pets and dangerous animals could be threatened, since USDA has some oversight role in that industry, too. Currently, most states have restrictions on owning animals like lions and monkeys, both for public safety and the welfare of such animals not designed for domestication. Yet Section 123 could reverse those restrictions.

Section 123 is as bold an attack on states’ rights and the principle of federalism that I have ever seen.  The hypocrisy is almost mind numbing. In Congress, agribusiness interests and other animal use industries often argue against federal animal protection legislation by saying that any such reforms should be considered by the states, not the Congress. So, they are states’ rights advocates when it’s convenient, and advocates of federal authority when that’s convenient. In short, they just don’t want any animal protection laws, and they are prepared to subvert the basic principles of federalism to get their way.

Fortunately, there is a hue and cry to strip this provision from the Farm Bill, and it probably cannot survive the legislative process. A dizzying array of groups have weighed in against the measure—not just The HSUS, but also consumer groups and environmental organizations. The National Association of Counties and the National Conference of State Legislatures oppose the provision. Even the Rice Producers of California and the American Corn Growers Association urge removal of the language; they fear Section 123 would prohibit state or local regulation of genetically engineered crops once approved by the USDA. I hope you will also make your voice heard—contact your U.S. Senators and U.S. Representative today and urge them to oppose Section 123.

If the House Committee on Agriculture does not strike this outrageous provision, The HSUS will lead a fight on the floor of the House to strip away the entire provision.