In some ways, we’ve already won the larger argument in society. Almost no one defends cruelty any longer. Animal welfare is widely recognized as a social virtue, and even the people and corporations that harm animals for recreation or profit try to disguise their conduct as promoting animal welfare. 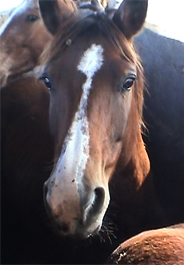 © The HSUS
A horse waits in line at a slaughter plant
in Mexico.

But the horse slaughter industry, and their allies in agribusiness and the political world, has exhibited some of the most fatuous logic. They say with a straight face that slaughtering tens of thousands of horses actually helps horses. They say that horses would be cruelly abused or abandoned if people couldn’t sell them to slaughter. It’s as if horse owners turn into would-be Michael Vicks if they are denied the option to sell their horses to killer buyers for 300 bucks.

It begs the question, why would we want to have irresponsible, reckless people driving public policy? Whatever happened to the idea of personal responsibility and calling on people to fulfill their obligations to properly care for their animals?

These specious arguments have been made more absurd by recent actions in the states and the federal courts. Earlier this year, a federal appellate court upheld Texas’ law banning the sale of horse meat for human consumption, shuttering the state’s two plants. And last week, a different federal appellate court upheld a new Illinois law banning horse slaughter. These two rulings, and the horse protection statutes they upheld, have stopped all horse slaughter in the United States.

The slaughter industry is now relying on its only remaining legal option: exporting live horses to slaughter plants in Canada and Mexico. The transport distances are longer and the killing is barbaric, especially in Mexico, as HSUS investigators have repeatedly documented.

So now, with some horses shipped 700 miles south of the U.S. border into central Mexico, can the slaughter industry and its political allies still make the argument that they are doing something good for horses by subjecting them to this interminable passage and slaughter by stabbing (which is the predominant method)? Yes, unbelievably, they continue to make the argument, exposing their positions as entirely contrived and self-serving. Any responsible lawmaker who looks at the situation should see through the charade.

With all of the plants now shuttered in the United States, it is time for the Congress to finally pass the American Horse Slaughter Prevention Act (H.R. 503 and S. 311). Not next year, but this year. The horse slaughter industry is ruthless and harsh, and it should not be allowed to abuse horses any longer.

Demand that your lawmakers take action this year to stop this cruelty.