There is always something that’s disturbed us more about cannibalism than mere homicide. In either circumstance, the victim is dead, but the consumption of the corpse multiplies the level of social disgust by a major factor. It not only offends our aesthetic senses, but also upends the notion of community. A civil society requires a minimum threshold of empathy and trust between people, and without absolute social taboos and legal standards against this conduct, an enduring social contract would be difficult indeed to achieve.

It’s a big leap from there to our killing and eating of non-human animals, but a cruelty case in Hawaii brought to light this week prompted me to think a bit more about our social relations with other animals and our expanding definition of community. 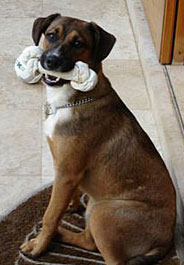 As Nelson Daranciang of the Honolulu Star-Bulletin reported yesterday, two former employees of Hawaii’s Moanalua Golf Club—Saturnino Palting, 58, and Nelson Domingo, 43—were indicted on second-degree theft and first-degree cruelty to animals charges for stealing a dog from one of the club’s members and then butchering and eating the dog, an 8-month old German shepherd-Labrador mix.

Frank Manuma, the dog’s owner, apparently had permission to leave his dog Caddy at an equipment shack near the clubhouse while he played a round of golf. When he returned, the dog was gone, and several witnesses reported having seen the defendants abscond with the young dog. According to Manuma’s wife, the two later confessed to police that they did in fact kill and eat Caddy.

Hawaii is the most recent state to have adopted felony-level penalties for animal cruelty, and this case is likely to be the first prosecution under that new statute.

Stealing and killing this vulnerable, trusting dog was appalling. But yes, it did compound the crime—even if it did not compound the suffering—for the men to have eaten this dog. We have developed social and legal codes to protect dogs and cats, and a pet-loving society rightly has a zero tolerance policy for people stealing dogs or cats and making them an ingredient in a stew. We have rules and standards, and those standards must be applied in the real world.

Indeed, our democratic society is in the throes of a larger debate about extending these standards, and the lines can get a bit blurry. For example, Americans do not eat horses, but some people in other nations do, and The HSUS has been driving the effort to halt the export of American horses for slaughter for human consumption in certain countries in Asia and Europe.

Our relations with animals in society are fraught with contradictions—we profess to be an animal-loving society, and we are capable of great philanthropy for animals, yet we live in the presence of enormous institutionalized animal cruelty. Still, the trajectory of the debate is clear—more empathy, more compassion, more protections for other beings that feel and suffer like we do. Where the lines are bright and clear—as they are in the case in Hawaii—the law should speak, and with resounding force.