Whale of a Fight

I was saddened and more than a little awestruck by the remarkable story last year of a bowhead whale who was killed in a June 2007 hunt by Inupiaq whalers off the Alaskan coast. Embedded in the whale’s layer of blubber, between the neck and shoulder blade, was a fragment from a bomb lance manufactured in the late 1800s in New Bedford, Mass. Whalers fitted the small metal cylinder with an explosive and time delay, so that it would detonate after it had been fired into the whale from a heavy shoulder or darting gun, fixed to the harpoon shaft.

In other words, this whale had been hunted more than 120 years ago, survived the trauma, and had passed the entire 20th century without further harm, before being killed by Alaskan hunters just last year. When Edison was working on the phonograph, this whale was feeding on plankton and diving in Arctic waters. Before Teddy Roosevelt charged up San Juan Hill, much less became president of the United States, this whale was learning his migration routes. 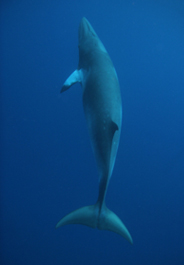 It’s rare to see a whale that old, and it’s all the more remarkable when you consider the decimation of whale species that the last one hundred years has wrought. This magnificent creature had survived a century’s worth of rapacious whaling, environmental despoliation, overfishing, and other threats.

For four decades, The HSUS and its international affiliate Humane Society International have been working to protect whales and other marine mammals from harm. One of the most important venues for the protection of whales is the International Whaling Commission, which begins its 60th meeting today in Santiago, Chile. Our staff experts participate in the meetings of the scientific committee and help national delegations to assess and develop proposals being considered by the full body.

While the IWC is an important gathering place for all people and nations interested in whales—for harm or good—The HSUS’s work to protect whales is carried out year-round. Throughout this last year we continued our successful supermarket campaign in Japan to end the sale of whale and dolphin meat in stores.

We worked with other non-governmental organizations throughout the world on a blueprint for the IWC’s future, laying emphasis on its accomplishments and its potential as a cetacean conservation entity. You can read the joint publication of this coalition, A Time to Refocus, here.

And last week, as IWC delegates began to gather in Santiago, we secured a unanimous congressional vote on House Concurrent Resolution 350—authored by Natural Resources Committee Chairman Nick Rahall (D-W.Va.)—which instructed the U.S. delegation to the IWC to stand strong on the moratorium on commercial whaling adopted in 1982. This was an affirmation of long-standing U.S. policy on whales, and especially important as the run-up to this year’s meeting was awash in rumors that a deal to permit commercial whaling under a new guise is in the works. Some months ago, continuing our efforts to deflate the political argument that “whales eat fish and so must be culled”—a specious argument that plays on anxieties about food security in developing nations—we commissioned a new study by a renowned fisheries expert, Dr. Daniel Pauly. Today, at 1 p.m. in Santiago, Dr. Pauly will discuss his work along with representatives of HSI, the World Wildlife Fund, and the Pew Environmental Trust/LENFEST. The three organizations, each one issuing a report on some aspect of the global fisheries argument, agreed to stand together in this important forum. And Dr. Pauly will also speak to a worldwide media audience in a 4 p.m. teleconference call organized by HSI.

Patricia Forkan, president of HSI, first attended the IWC in 1973, a decade before the moratorium was adopted, and has played a role in virtually all of the crucial victories gained in the worldwide struggle to save whales. She’s missed just one IWC meeting in all of those years. I often try to convey to readers that we’re hard at work every day on any number of fronts to help animals. But as Patti’s dedication to advancing our work at the IWC and elsewhere attests, we’re also in it for the long haul.

You can read daily dispatches from our team at IWC here. And you can take action to support whales here.