The Dr. Will Free You Now

This weekend, the American Veterinary Medical Association (AVMA) hosted its annual convention, in New Orleans. After the Humane Society Veterinary Medical Association (HSVMA) proposed a resolution supporting a move away from the confinement of veal calves in tiny stalls, the AVMA House of Delegates referred the resolution to its Animal Welfare Committee, which will meet in the fall. Then the AVMA went ahead and passed its own resolution gingerly taking a stand—I think, it seems, perhaps—against veal crates. The resolution reads, "Resolved: that the AVMA supports a change in veal husbandry practices that severely restrict movement, to housing systems that allow for greater freedom of movement without compromising their health or welfare." 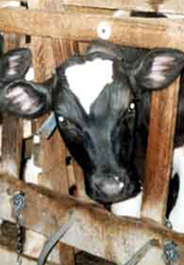 It’s vague. It’s murky. But it does appear to be progress.

It has been a year since the American Veal Association passed a resolution pledging to phase out the use of crates. And it’s been even longer since the nation’s two leading veal producers—Strauss Veal and Marcho Farms—announced that they would eliminate crating and move to group housing systems. The CEO of Strauss Veal called the crates "inhumane and archaic" saying that they "do nothing more than subject a calf to stress, fear, physical harm and pain."

It is a fact, if a bit counterintuitive, that the AVMA still is weaker on this issue than the leadership of the veal industry. Progress at the AVMA in the arena of farm animal welfare has been halting, to say the least, with food industry veterinarians seeming to control the discussion within the organization and thwarting the adoption of mainstream and well-accepted positions.

The action taken this weekend does at least show respect for the position that HSVMA advocated, and reflects some awareness that the AVMA is lagging noticeably and dangerously behind. (In May Dr. Ron DeHaven, the AVMA’s executive vice president acknowledged, "We should have realized, years ago, that veal crates have to go; the practice is simply not defensible in the court of public opinion.")

These changes must come. The HSVMA is a new force for the good that can help drive this change. Also, the California Veterinary Medical Association (CVMA) has endorsed Proposition 2, the November ballot initiative in California to phase out the inhumane confinement of farm animals in veal crates, gestation crates, and battery cages. CVMA some years ago developed Eight Principles of Animal Care and Use, and the adherence to these principles guided the endorsement. Already more than 500 individual California veterinarians have endorsed Proposition 2, and the number is climbing every week.

In California, veterinarians are rightly in the forefront of efforts to protect animals. HSUS will stand shoulder-to-shoulder with them to advocate for responsible changes that, at the very least, allow animals raised for food to turn around, spread their limbs, and lie down. That’s the least we can do for these creatures.