The One to Watch 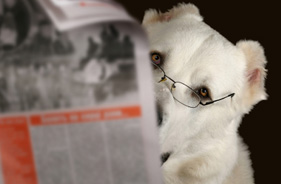 If you scan the journals and newsletters of our political adversaries—the NRA, the Center for Consumer Freedom, the U.S. Sportsmen's Alliance, the United Egg Producers, the National Animal Interest Alliance, and a phalanx of others—you'll see that The HSUS is top of mind for nearly all of them. They fear us more than any other animal protection group because of our blend of political power, investigative and public relations capabilities, strategic thinking, and mainstream appeal.

For me, their brickbats are yet another indicator of our effectiveness. And, for you I hope, it's a reminder of the value and importance of supporting your HSUS. If we were not effective in executing our campaigns, or if they could easily marginalize us and ward off our offensives, they'd not give us a second thought.

But they know that we play to win.

I thought one of the most telling recent comments came last week from Rick Berman, the infamous executive director at the Center for Consumer Freedom and the apostle of industry double-speak. He wrote the following to industry leaders:

With the passage of California’s Proposition 2, more people have come to realize the evolving threat of the power, influence, and growing wealth of the Humane Society of the United States (HSUS). Ballot initiatives and legislation similar to Prop. 2 will soon be introduced in more states. HSUS’s massive budget, unwarranted positive public reputation, and deep-pocketed Hollywood friends will only become a greater threat to industry in a post-Proposition 2 business environment. It is crucial that a key broad cross-section of agriculture leaders start managing this nationwide threat now, before it is too late or too expensive to match HSUS dollar for dollar.

Now, you've heard me peel back the onion and tell you about Berman and the Center for Consumer Freedom (CCF). It is a front group for tobacco, alcohol, restaurant, and agribusiness interests. It has been condemned by the editorial boards of USA Today and The Washington Post for misleading the public. ABC News has also exposed the organization as a front group. Started with a $600,000 grant from Phillip Morris, the CCF campaigns against groups as varied as Mothers Against Drunk Driving, the Centers for Disease Control, and The Humane Society of the United States.

But what Berman is saying is that the industry folks need to pool their resources and try to tear down The HSUS. Forget about other groups and focus on The HSUS, he says.

Let me assure you of one thing: Every time Berman and his cohorts attack The HSUS, we will answer. And as we answer, more people will look at The HSUS and see how sturdy our facts and values are. In the past CCF has taken out ads that have excoriated The HSUS. And each time we have been rewarded with more attention to our work and more new members.

It's similar to our past responses to the U.S. Sportsmen's Alliance, an extreme gun and ammo trade group that tried to shoot down our program to help pets affected by foreclosures. Every time USSA attacked The HSUS, we highlighted their offensives and asked you to increase your financial support, and you did. Now I am asking you to show that same level of commitment to The HSUS and our critical animal protection programs in the face of the coordinated attacks to come. If you want to start today, you can support our work here.

Our opponents rightly recognize The HSUS as the greatest threat to their continued reliance on cruelty as a standard business practice, custom, or hobby. We are a force because we are 10 million strong, and when so many people of conscience take collective action, there is no question that we will advance the principles we hold so dear.

Berman's words remind us that now is a great time to renew your support and rededicate yourself to advancing our mission.