The HSUS Strategy for Success

When you are the largest and most accomplished organization in the animal protection movement, it’s logical that you’ll be feared by groups or corporations that stand in the way of progress. They typically don’t argue on the merits of the issues, but instead try to divert attention and reframe the debate. That’s the case with their rejoinders to The HSUS, which is the object of sustained attacks, caricatures, and mischaracterizations by people who inhabit the domains of cockfighting, puppy mills, horse slaughter, trophy hunting, trapping, fur fashion, animal agribusiness, commercial whaling, and other animal exploitation industries. Survey the leadership of any of these economic interests, ask them which group they fear most, and you’ll get these four letters: HSUS. If you doubt that, simply read their blogs or trade publications, and the conclusion is inescapable. 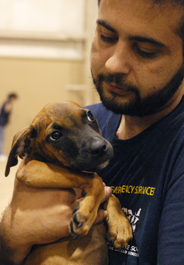 © The HSUS
Our work confronting cruelty is unmatched.

They’d ignore us if they thought we were naïve or silly. But the fact is, they fear us because we are effective, we drive public opinion, and we won’t accept their adherence to their present conduct or economic formulas.

While The HSUS may not have always been viewed over the decades as the most influential group in our field, there’s little doubt about our preeminent status now. In the last five years, we’ve combined our operations with other groups or created sister organizations (e.g., The Fund for Animals, Doris Day Animal League, Humane Society Legislative Fund, Humane Society Veterinary Medical Association), added or expanded internal capabilities (e.g., Animal Protection Litigation, Campaigns, Investigations, Equine Protection, Field Services, and Emergency Services), nearly doubled in size, aimed for the mainstream of American thought, and brought a must-win attitude to the fight. We think America, and the world, needs a hard-hitting, highly effective force for animal protection, and that’s exactly what we are.

As counter-maneuvers to our offensives against animal abuse, our opponents try to set up a straw man caricature of The HSUS and then knock it down. Take the case of the public interest hackers at the Center for Consumer Freedom (CCF), a front group for corporations that cause widespread animal abuse, jeopardize public health, and harm the environment. CCF says The HSUS gets donations by saying it runs or funds the nation’s animal shelters, and even apparently got a local television station to take the bait and regurgitate its viewpoint (the station subsequently took down the piece after we detailed its reckless disregard for the truth).

If anyone reads my daily blog, looks at our website, reads our magazines, or scans our email and direct mail letters, you’ll find no claims that we run America’s 3,500 animal shelters, or serve as a granting agency for them—or that any one organization serves this function. Their accusation is a fiction. In fact, I launched this blog two years ago in order to inform people about the depth and breadth of our programs in public policy and enforcement, corporate reforms, education and awareness building, and hands-on care and services for animals (we provided direct-care services to more than 70,000 animals last year). Yes, we do help shelters in myriad ways, and are tremendous advocates for them, but we do much more than that, because someone has to challenge cruelty in other arenas, and especially at the national and international level. And you, our supporters, know exactly what The HSUS does and what we stand for.

CCF and other opponents would love it if we just gave money to shelters. That way, the corporations that fund CCF would have much clearer sailing in conducting their animal exploitation activities. So CCF’s straw man construction is not only a deceit, but also their fondest desire. Right now, we’re their worst nightmare, and we are not going away. © The HSUS/Petros
Promoting adoption is one of many priorities.

In the United States, there are 3.7 million dogs and cats euthanized at public and private shelters every year—at least 3 million of them thought to be healthy or treatable and suitable for adoption. That’s a tragedy, and we as a nation must do better when it comes to caring for our companion animals. The HSUS is conducting major national campaigns against puppy mills and dogfighting as part of the answer. We’re launching, with the Ad Council and Maddie’s Fund, a multi-million dollar Shelter Pet Project in July to drive shelter adoptions with the goal of ending euthanasia. We’ve also launched our “After Katrina Project” in the Gulf Coast to drive spaying and neutering, with the hope that the execution of a research-driven, professional marketing effort can move the needle on this problem, succeed in achieving widespread sterilization of dogs and cats, and then allow us to export this plan to other parts of the country. It is our firm ambition and plan to drive euthanasia rates of healthy and treatable animals to levels approaching zero.

And while we are putting significant resources into the fight to eliminate the euthanasia of millions of dogs and cats, and joining our friends at Maddie’s Fund and others in this battle, it would be a terrible dereliction of duty if we did not address the other problems of animals in society. There are 10 billion animals raised for food, principally on factory farms, in America every year—and that’s nearly 30 million a day. There are tens of millions of animals used in laboratory experiments. More than 100 million killed for sport. Tens of millions killed in the fur trade, and tens of millions killed worldwide in cockfights and dogfights.

In addition to criticisms from industry groups, there are individuals who fall within the broad boundaries of the animal protection movement who would like us to spend all of our resources on their favored issue, or gripe because we do not hew to their orthodoxy. But I’m afraid they often miss the bigger picture, and our interest in reaching mainstream Americans. We have to be there for as many animals as we can, and use our finite resources in a highly strategic way to achieve the biggest impacts.

We concentrate, in terms of our offensives against human-caused cruelty, on several major areas: factory farming, animal fighting and cruelty, puppy mills and pet overpopulation, horse slaughter and other equine abuses, seal killing and the fur trade, captive hunts and other hunting abuses, and the trade in wild animals and their parts. And increasingly, we do it not just in the United States, but also abroad.

Take a look at our accomplishments, some of which from the last four years are enumerated here. Overlay it against the other groups in our field, or look at it compared to the past progress for animal protection. You’ll see unmatched achievement and unparalleled progress, and you'll see why your HSUS is the subject of attacks.

So I say to the industry critics, it’s time for you to address these problems, and start adjusting to the evolving ethos in American culture. You’ll get ahead through innovation and adaption, not stubborn adherence to custom or current business operations. And to the single issue folks within our movement, good for you for caring about your favored issues, since animals need all of the advocates and focused attention they can get. But The HSUS must work to fulfill its broader mission, and we won’t criticize others for not working on all of the other issues that we must attend to and cover.

While we help many thousands of animals in distress, our primary strategy is to strike at the root of the problem, rather than to address the symptoms. Whether it’s in the field, in the courts, in legislatures, in influencing public opinion, conducting undercover investigations, or by some other lawful and mainstream means, there’s no group that is a greater agent of change or brings the arsenal of tools we do to the fight for animals.

Again, I encourage you to take a look at our record of achievement in just the last four years.