Almost exactly four years after Hurricane Katrina made landfall, with all her devastating force, the memories of the crisis brought on by forced abandonment of pets in the strike zone come flooding back for all of us at The HSUS who participated in the response effort. Desperate rescue attempts of stranded or trapped animals, the massive emergency sheltering operation organized in the midst of chaos, the endless toil of thousands of caring people in the sweltering heat—all of the bad and all of the good that came from it. 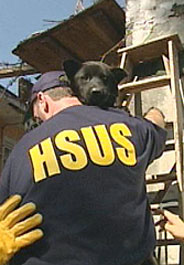 Katrina was a yardstick moment in the history of the humane movement. But more importantly, it was a moment of awakening for many Americans, many of whom had never realized how disaster planning without an animal rescue component puts animal and human lives in jeopardy. It reminded Americans of the strength of the human-animal bond. Many people chose to stay behind rather than to abandon their best friends or risk their safety by relying on first responders with no guidance or instruction in dealing with animals.

Katrina made the Gulf Coast states a region of special concern for The HSUS, and we’re more active there than ever. We’re leading a raft of ongoing projects and initiatives in Louisiana and Mississippi, and we’re making good on our promise to make the animal care infrastructure better than it was before the disaster. That’s an important legacy for the animals and those who labored to help them.

The Katrina disaster greatly heightened awareness about animal problems within Louisiana, and state lawmakers, prompted by The HSUS, have passed new legislation since Katrina to outlaw cockfighting, strengthen anti-cruelty laws, include animals in disaster planning, and crack down on puppy mills. We've seen similar progress in Mississippi.

On the national level, too, there is reason for optimism. We passed the Pets Evacuation and Transportation Standard (PETS) Act, and changed the landscape on disaster planning when it comes to animals. President Obama has made an inspired choice in selecting Craig Fugate as Administrator of the Federal Emergency Management Agency in the spring. A pioneer of animal-focused disaster planning during his tenure with the Florida Division of Emergency Management, he championed the recognition of the human-animal bond in disaster planning and response, serving on the state committee that wrote Florida’s original animal disaster plan and establishing one of the first pet-friendly disaster shelters in the country. There are many other signs of how the momentum has shifted in the right direction on the issue of disaster planning for animals, but the presence of such an individual in the position of FEMA Administrator is a great consolation to us.

When the next disaster hits, there will undoubtedly be challenges. But it doesn’t look like persuading disaster response officials at the local, state, and national level that animals are important will be one of them. That was a debate resolved on the ground in the bitter and harrowing weeks after Katrina struck, when we all vowed “never again.”