Redoubling Our Efforts in West Virginia

"It's only illegal now because of the puritan sense of a few people who don't find it an appropriate sport," said Bradford Parker, a spokesman for the West Virginia Association for Gamecock Sports in an interview with the Charleston Gazette. He was speaking of cockfighting and his group's announcement this week that it would ask the West Virginia legislature to repeal the state's rather anemic law prohibiting cockfighting. 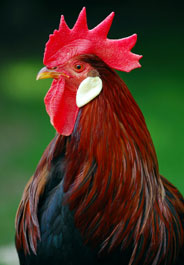 It's hard to believe this guy and his group of illegal cockfighters—dressed in chicken suits—could advocate such a legislative action with a straight face, but he does appear to be serious. Fortunately, the Senate Judiciary Committee Chairman is having none of it. "It's barbaric," Senator Jeff Kessler says of cockfighting. "West Virginia doesn't need any further negative stereotypes."

We at HSUS have our own plans for cockfighting legislation for the upcoming legislative session in Charleston. We want to make it a felony, since West Virginia is one of just 11 states with misdemeanor penalties for staged fights between roosters. The state law also does not ban possession of fighting birds, nor does it outlaw being a spectator at cockfights—two critical components of strong statutes against the practice. In fact, West Virginia is part of the "Cockfighting Corridor"—a band of states from Alabama to Ohio with the weakest anti-cockfighting laws in the nation and some of the most persistent and widespread illegal cockfighting activity. In some of these states, the laws are so weak that the activity is essentially decriminalized.

Senator Kessler is an ally in our anti-crime and anti-cruelty efforts. He told reporters yesterday, in response to the announcement by the Gamecock Sports organization, "The only legislation I have any interest in running out of my committee (Senate Judiciary) would be something that would strengthen the penalties for engaging in it, not for legalizing it in any fashion."

Senator Kessler says involvement in cockfights should be a felony offense in West Virginia. "I guess there's some pockets of it where it does occur and does go on, but that doesn't necessarily mean that it's something that we should embrace in the state," he says. "In fact, we should redouble our efforts to eradicate it."

Mr. Parker will be interested to know that our arguments, and Senator Kessler's, have evolved a good bit since the days of the Puritans. We know it's not just a matter of offending public sensibilities. It's a matter of vicious animal cruelty, where the combatants have knives or curved ice picks strapped to their legs and use these implements to hack each other to death in a pit. And we also make the connection between cockfighting and other criminal behavior, such as illegal gambling, narcotics traffic, and violence against people. It also may play a role in spreading bird flu.

It was in 2007 that we finally got the last two states with legal cockfighting—Louisiana and New Mexico—to enact legislation to criminalize the activity. Now, we are methodically going state by state to make it a felony and to fortify other provisions of these laws. Mr. Parker's wild idea is a reminder that cockfighting is alive and well in West Virginia and elsewhere, and that we cannot relent in our efforts to eradicate this scourge from our nation.

Thanks to Mr. Parker’s reminder about the wishes of cockfighters, we'll now join Senator Kessler in redoubling our efforts to see that no state is a refuge for this form of animal cruelty.