Earlier this month I shared the story of Fay, rescued in July during an eight-state dogfighting raid—the most sweeping crackdown of its kind in U.S. history. A dogfighter had cut off her lips—in a demonstration of the barbarism of this underground industry. Thanks to the intervention, she was saved from the other perils of the dogfighting industry, and now lives in a safe and loving environment.

Today I share another survivor story of a different stripe. This survivor was discovered by our Protect Seals team off the eastern coast of Canada as they went about documenting the killing of baby harp seals—and then transmitted the images across the world to drive public awareness of the slaughter. He was a small, scared seal pup who had survived only by cowering in an ice cave. Rebecca Aldworth, our lead campaigner against the Canadian seal hunt, sat near him for a few minutes, and named him Sully.

In large part because of our efforts to close global markets for seal skins, prices for seal fur in Canada crashed this year, and there were far fewer sealers on the ice. They weren’t so relentless in their killing efforts, and that’s why so many seals survived the slaughter this year. The Canadian government had authorized sealers to kill more than 330,000 of the animals but sealers took 72,000 instead. That’s 260,000 seals who lived because of our global efforts against the fur trade.

There are countless thousands of animals whose lives have been turned around because of our efforts. To bring us even closer to ending the seal hunt once and for all, to help us save even more animal survivors like Fay and Sully, please consider a year-end donation to our 2010 Animal Survivors Fund. And stay tuned for our final Animal Survivor video next week. 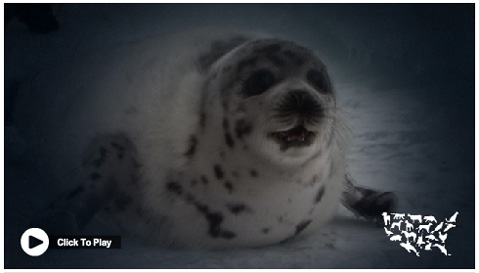