The HSUS: Advocating for All Animals

I write a page three essay for each issue of All Animals, our bi-monthly member magazine, and my piece in the current issue is below. If you’re not already an HSUS member, and now join at the $25 level or higher, you’ll receive a subscription to All Animals. It’s a fabulous magazine, and it’s just one member benefit you’ll receive. 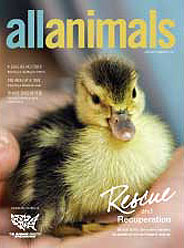 The HSUS
Preview the current issue of All Animals.

Some people make the assumption that the cause of animal protection amounts only to the care of dogs and cats, particularly those in shelters. That’s an important focus of humane work, and it’s always been a concentration area for The HSUS—which has several departments with professional staff focused on companion animal issues, runs the nation’s largest trade show for sheltering professionals, provides evaluation and consultation services for animal shelters, and publishes Animal Sheltering magazine. But there are many other animals in crisis in the United States and abroad, and they need help, too.

Public and private shelters put down 3.7 million dogs and cats a year in the U.S.—and about 3 million of them are suitable for adoption. That’s a tragedy, and we as a nation must do better. Last year, with the Ad Council and Maddie’s Fund, we launched the multimillion-dollar Shelter Pet Project to drive adoptions of homeless animals. We’ve also launched our After Katrina initiative in the Gulf Coast to promote spaying and neutering, with the hope that the implementation of a research-driven, professional marketing effort can move the needle on this problem. It is our firm ambition to end euthanasia of healthy and treatable dogs and cats.

The HSUS also operates the most aggressive and effective campaigns to combat the cruelty associated with puppy mills and dogfighting. Both practices represent an extreme severing of the bond between people and dogs. With several partners, we’ve just announced a statewide ballot initiative campaign in Missouri to crack down on puppy mills—and that state alone has 3,000 mills.

And while we put major resources into all of these companion animal efforts, it would be a terrible dereliction of duty if we did not address the problems faced by other animals. There are 10 billion animals raised for food in America every year, principally on factory farms—that’s nearly 30 million a day. There are tens of millions of animals used in testing and laboratory experiments. More than 100 million killed for sport. Tens of millions killed in the fur trade, and tens of millions killed worldwide in cockfights and other forms of human entertainment.

In addition to the criticisms we get from animal industry groups bellyaching that The HSUS is the greatest threat to their exploitive practices, there are individuals who fall within the broad boundaries of the animal protection movement who would like us to spend all of our resources on their favored issue or who gripe because we do not hew to their orthodoxy. But I’m afraid they often miss the bigger picture. We have to be there for as many animals as we can, and use our finite resources in a highly strategic way to achieve the biggest impacts.

That’s why we at The HSUS and our global arm, Humane Society International, have highly developed programs that also zero in on factory farming, horse slaughter and other equine abuses, seal killing and the global fur trade, captive trophy shoots and other inhumane hunting practices, the trade in wild animals and their parts, whaling and other commercial marine mammal killing, and so much more. In the central Asian country of Bhutan, we are now in the process of sterilizing 50,000 street dogs, and we have similar programs at work in India.

It’s our deliberate plan at The HSUS to focus on the macro-level problems, to advocate for all animals, and to strike at the root causes. There’s no group in the world quite like The HSUS, and thanks to you, we put boots on the ground in this country and abroad to lessen the suffering of billions of helpless creatures.