Full-Page Proof of Our Impact

Rick Berman criticizing the operations of a charity is like Jack Abramoff criticizing an organization for reckless lobbying. Berman’s the worst of the worst. You can read Ian Shearn’s exposé of him and his group here.

Berman’s ads are historical flops—they don’t generate much public interest and virtually zero serious news media interest. They are just too far off base. Indeed, The HSUS’s greatest period of success and growth has coincided with Berman’s attacks on us. So what purpose do such ads serve? They simply allow Berman to show his shadowy funders that he’s doing something.

And that’s important, because Berman’s whole aim is to keep cashing in. According to the Center for Consumer Freedom’s 2008 tax return, the multimillionaire lobbyist Berman and his for-profit PR firm get 92 percent of all of the revenue taken in by the Center for Consumer Freedom, which is a so-called nonprofit charitable organization. You’ve got to give the guy credit for the boldness of this self-enrichment scheme and the abuse of the federal tax code. In terms of raw greed, Berman makes Abramoff look like a mere amateur. 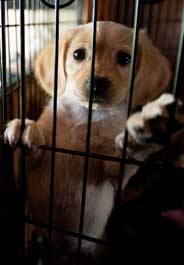 Kathy Milani/The HSUS
One of more than 200 dogs rescued
from a Tennessee puppy mill in April.

There’s one reason that Berman and his funders are conducting this campaign: they fear The HSUS, and they know we have a track record of success.

The HSUS celebrates the protection of all animals and confronts all forms of cruelty, such as dogfighting, puppy mills, and factory farming.

The HSUS attacks the root causes of problems, not just the symptoms. Our primary goal is to prevent cruelty to animals before it happens and prevent animals from ending up in distress.

Rescuing individual animals is not enough. The HSUS mitigates suffering for vast populations of domesticated and wild animals.

The HSUS changes laws and makes sure they are properly enforced, and changes corporate policies, so that wide-scale abuses can no longer occur.

The HSUS has the power to confront large-scale cruelty, and it has the experts and organizational muscle to make effective change.

The HSUS supports local shelters and provides direct care for animals—but also confronts the national and international problems facing animals, which local shelters don’t have the reach or the resources to take on.

The HSUS is the largest animal protection organization—with 11 million supporters, one in every 28 Americans. Our political opponents attack the organization precisely because we are a mainstream voice for animals and the greatest threat to animal abuse.

Every time Rick Berman runs an advertisement, it affirms that we’ve made the right decisions in taking on the biggest industries and confronting their abuse of animals, whether the abuse occurs on the factory farm, the back lot of some tawdry circus, or the ice floes of Atlantic Canada. There’s no relenting here—just resolve to keep on with the fight on every day.