An HSUS investigator has gone undercover again to take a behind-the-scenes look at the living conditions of laying hens confined in battery cages—in this case, at a facility run by Cal-Maine, the largest egg producer in the country with 26 million birds under its control. Cal-Maine’s 2010 Annual Report to shareholders says that the company’s shell eggs are sold to “a majority of the largest food retailers in the U.S.” Among its customers are retailers such as HEB and Publix. 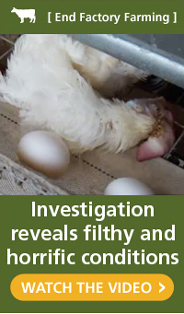 The findings are deeply disturbing, and about as grim as the stuff we uncovered last April at Rose Acre Farms and Rembrandt Enterprises, which are, respectively, the second and third largest egg producers in the nation.

At Cal-Maine’s factory farm in Waelder, Texas, which confines about 1 million birds in 18 barns, our investigator documented hens in overcrowded cages, with some of the birds laying eggs on top of the rotting corpses of dead cage-mates. While most of these birds can barely move in their cages, some were immobilized in an even more gruesome way; they got trapped or tangled in the wires, left there to languish and perhaps to die from starvation or dehydration. Our video shows hens with bloody uterine prolapses, broken legs, and facial abscesses, some of them covered almost head-to-back in feces from the hens in the upper-tiered cages. Some of the dead hens—still in the cages—appeared almost like carpets on which other hens could step without having to touch the cage floor. The investigator also videotaped hens who had died after becoming trapped under the feeding troughs of their cages, with their decaying heads resting on the moving belt that carries the eggs from the cages.

When you have such consistent problems revealing themselves—remember now, we are talking about the nation’s top three producers with nearly 50 million hens under their control—it is clear that something is rotten in the industry. There is no meaningful on-the-farm oversight by state or federal authorities when it comes to animal welfare, and you have confinement systems that are inherently inhumane. Even the best-managed cage systems present animal welfare problems that cannot be solved by careful stewardship and adherence to best practices.

The trade association for the industry, the United Egg Producers (UEP), says it maintains an animal welfare program. We’re glad it acknowledges the need for such a program, and glad that one exists, since the situation could be even worse. But the current program is miserly when it comes to the care of these creatures (read more here). If animals cannot even extend their wings, if they never get out of an overcrowded cage, and if they live on wire floors in barren cages without perches, nest boxes, or any enrichments, what does the animal welfare standard really mean?

In September, I wrote to FDA Commissioner Margaret Hamburg and asked her to meet with us about the results of our Rose Acre and Rembrandt investigations. At Rose Acre and Rembrandt, our investigator had documented conditions similar to those discovered by the FDA at two other Iowa factory farms that were responsible for a Salmonella outbreak that caused illness in more than a thousand consumers. A whopping half billion eggs were recalled from those two farms—Quality Eggs and Hillandale—and the FDA was called before Congress to testify as to the agency’s role in protecting consumers from bad eggs. I’ve written again to Commissioner Hamburg but this time about Cal-Maine and the hideous conditions we’ve again documented. Let’s hope the FDA heeds our warning—after all, the company just had to issue an egg recall earlier this month for Salmonella concerns. Something has to change within this industry, and minor tinkering with the rules is not going to turn around the situation. Today, the Senate may take action on the Food Safety Modernization Act to update food safety regulations and increase the FDA’s regulatory authority.

In 2009, the FDA passed the Egg Safety Rule which has very general requirements related to egg safety. I’ve asked Commissioner Hamburg to reopen the Egg Safety Rule and propose a phase out of cage confinement of hens, grounded on the argument that there is an understandable and compelling connection between these confinement systems and food-borne illness.

But it’s not just the government that must step up. Retailers and consumers must, too. If you buy eggs, please don’t purchase eggs from caged hens. The marketplace now offers higher welfare choices, such as cage-free, free-range, and organic options that offer the animals a better life than that of their caged counterparts.

The HSUS will continue to fight for the proper care of these animals. Today’s announcement is part of our broader effort to expose the worst problems in industrial agribusiness and to call people of conscience to act and make things better.