A Horse and Her Foal Miraculously Saved from Slaughter

Until we helped to shut them down in 2007, three U.S.-based, foreign-owned slaughter plants killed tens of thousands of American horses on American soil for export as a high-end meat product in Europe and Asia. The killer buyers have been resourceful ever since, and they've now shifted their killing of American horses to plants over the borders in Canada and Mexico, where the slaughter continues.

By all accounts, these are generally healthy animals—not the old, injured, or infirm as some like to claim. They are former racing horses, pets, and horses from all walks of life who were discarded by people who did not fulfill their responsibilities to these animals. People used them, and then shunted them aside. 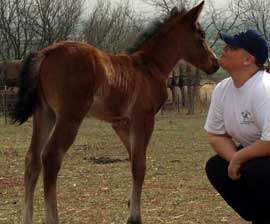 Last year, there was a tragic illustration of how dangerous even international ground transport can be for these creatures. HSUS's Julie Hauserman related the story of a killer buyer driving toward Mexico with dozens of horses—in a trailer designed for cattle—who crashed the vehicle when he reportedly fell asleep behind the wheel in Oklahoma. Good Samaritans helped move the surviving horses off the highway, but more than a dozen animals died as a result of the trailer overturning.

When Cynthia Armstrong, our Oklahoma state director, learned about the crash and found out that the 17 remaining horses were slated to make another trip to the Mexican slaughterhouse, she and members of Blaze's Tribute Equine Rescue worked successfully to obtain their release.

Two generous HSUS donors provided funds to pay for veterinary care and to transport the animals to Blaze's Tribute in Jones, Oklahoma.

Desiree Walling with Blaze's Tribute said, "When I heard about the accident, I just knew these horses had to be saved. They had been through so much." The rescue group agreed to foster all the horses until they were ready for adoption.

Blaze’s Tribute cared for the horses and discovered that one of them, a bay mare named Catori, had been pregnant when she was rescued.

After months of waiting and special care, Catori gave birth a few weeks ago on the spring equinox, under the dramatic "supermoon,"  when the moon was full and unusually close to the Earth. The healthy foal was aptly named “Moonstruck.”

Armstrong says, "He's a symbol of hope and rebirth and the survival of all of these horses…to have this baby was an uplifting moment for all of us involved in the rescue."

Catori and Moonstruck are available for adoption, and in the meantime they are enjoying each other's company in peace on Walling's pastures. Ten of the other survivors have found good homes, thanks to Blaze's Tribute, and you can read more about the adoptable horses on their website.

In The Bond, I deconstruct the false claims of the horse-slaughter industry and their allies in agribusiness, and I also recount the story of two other survivors from this predatory industry—Mari Mariah and Josie Sahara—who were marched onto the slaughterhouse floor and then marched back out after a court order shut down operations at the plant. They’re now living the good life at our Cleveland Amory Black Beauty Ranch.

The battle to save these iconic animals from the worst of fates continues. You’ll be hearing more from me about it in the months ahead—especially when your volunteer efforts and phone calls can make a difference in securing more enlightened policies for the sake of America’s horses.