Stopping the Slaughter of Our Horses

There’s been a flurry of activity with bearing on our campaign to stop the slaughter of American horses. A few weeks ago, I asked you to call your U.S. representative and urge him or her to support an amendment led by Rep. Jim Moran, D-Va., to bar funding for federal inspections at any horse slaughter plant in the United States, and thereby prevent the opening of any such plant in the country. It was a close vote in the House Appropriations Committee, but the Moran amendment passed, and it was retained in the bill subsequently passed by the full House of Representatives.

Now we must gear up to fight this battle in the Senate, and we know we’ve got some great allies there. In fact, this month Sens. Mary Landrieu, D-La., and Lindsey Graham, R-S.C., introduced S. 1176, the American Horse Slaughter Prevention Act, to end the cruel slaughter of American horses for human consumption and transport for that purpose in this country and in our neighboring nations. “As a lifelong horse lover and rider, this practice is appalling to me, and more importantly, the majority of Americans oppose it,” Sen. Landrieu announced in introducing the bill. 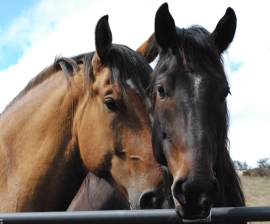 Though the foreign-owned horse slaughter plants in the United States were shuttered in 2007, many thousands of American horses still endure the long journey to Canada and Mexico to be killed for their meat every year. The methods used in these slaughterhouses are often deplorably cruel, though evidence shows that U.S. plants were also plagued with problems.

Last week, the federal Government Accountability Office released a new report on this situation. Though some in the horse slaughter industry have tried to use it as a rallying cry to restart this barbaric practice in our country, the report confirms the obvious: transporting horses long distances in double-decker trailers and killing them for meat are fundamentally inhumane.

The report discusses horse neglect and abandonment, which is a serious problem that our Animal Rescue Team and animal care centers tackle head-on through rescues and providing sanctuary for mistreated horses. In the midst of a serious economic downturn, caring for any animal can be difficult to afford, but there are humane options for owners who can no longer care for their horse.

The report states that the number of horses being sent to slaughter has remained about the same since the closure of U.S. plants, suggesting that the same number of irresponsible people are still sending their horses to be killed for meat.

The government report also underlines problems with the transport of horses to slaughter, an issue we’ve been concerned about for years. The trip is stressful and dangerous for the horses, traveling long hours, often in double-decker trailers that were designed for shorter animals such as cattle and pigs. There have been too many horrific trailer accidents that have cost many slaughter-bound horses their lives, like the crash the miracle horse Catori survived last year. (She and her foal are still doing well.)

The report says that the USDA must do more to protect horses during transport. This week, Sens. Mark Kirk, R-Ill., and Frank Lautenberg, D-N.J., introduced S. 1281, the Horse Transportation Safety Act of 2011, to ban double-decker trailers for interstate transport of these animals.

The report further recommends that “Congress may wish to consider instituting an explicit ban on the domestic slaughter of horses and exports of U.S. horses intended for slaughter in foreign countries.” We couldn’t agree more, and that’s exactly what the American Horse Slaughter Prevention Act would do. What’s also needed is more education and outreach about the responsibilities and expense of horse ownership, and the options available to struggling horse owners such as adoption and rescue groups. And we need to rein in overbreeding of horses that creates more horses than there are good homes for them.

You can stay up-to-date on the latest news on this campaign by joining our Facebook cause.