Campaigning Against Animal Fighting on Capitol Hill with Michael Vick

Within the last decade or so, as I chronicle in The Bond, the legal landscape related to animal fighting has changed dramatically for the better, with federal law now making it a felony crime to engage in dogfighting or cockfighting or to possess, buy, sell, train, or transport animals for fighting purposes. The last strongholds of cockfighting in the United States now also outlaw the practice at the state level and all 50 states have felony-level penalties for dogfighting.

The HSUS started driving the reform efforts in a very methodical and determined way in the 1990s, but it was turbo-charged in 2007 when the crimes of Michael Vick and his co-defendants came to light. 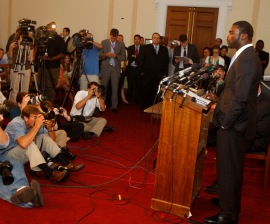 Today, Michael Vick joined me on Capitol Hill for HSUS’s latest offensive to fortify the federal law against both dogfighting and cockfighting. He drove down this morning from Philadelphia, and we just ended a full day’s worth of Congressional meetings, public events, and media interviews. You’ll certainly hear and read about his visit to Capitol Hill in the press, and I very much hope that the exposure we generated today builds a clamor for enactment of new legislation that he endorsed today.

Introduced by Reps. Tom Marino, R-Pa., and Betty Sutton, D-Ohio, H.R. 2492, the Animal Fighting Spectator Prohibition Act seeks to make it a crime to be a spectator at an organized animal fight and an additional crime for an adult to bring a child to one of these cruel spectacles.

While the federal law against animal fighting is strong, these gaps in the law need to be addressed, in order to provide a meaningful deterrent to anyone who wishes to go down this road and to get involved in this kind of activity. Spectators are participants and accomplices who enable the crime of animal fighting, provide a large share of the funding for the criminal enterprise through their admission fees and gambling wagers, and help conceal handlers and organizers who try to blend into the crowd when a bust occurs.

I’ve taken some heat for working with Vick to spread the word about animal fighting, but I am more convinced than ever that it was the right thing to do. We’ve spoken together in front of more than 10,000 at-risk kids and warned them away from getting involved in dogfighting and other forms of animal cruelty. These are conversations we’d never have had but for the partnership. And today, we cast a major national spotlight on the need to further strengthen the federal law, which was last amended in 2008 in response to the awareness that resulted from Vick’s case.

Michael had a lot of important things to say today, and I wanted to share a portion of the statement he delivered before a room packed with TV cameras and journalists.

“I deeply regret my previous involvement in dogfighting. I am sorry for what I did to the animals. During my time in prison, I told myself that I want to be part of the solution and not part of the problem.

I’ve been speaking to kids and urging them to be responsible and to be good to animals. And today, I am here to send a similar message–to help address the problem and to break the cycle of young people getting mixed up in this crime.

Dogfighting is inhumane. And it is illegal. It is a federal felony, and a felony in every state.

Since my case came to light, The Humane Society of the United States has worked to upgrade laws in 35 states against animal fighting.

It’s still happening in communities across the country, but we have an opportunity to create meaningful change.

The laws are not just to punish people, but to prevent people from getting involved in the first place. That’s why education is so important.

I did not get involved in dogfighting for the money. But for most people involved, that’s a big part of it. If you take away the profits, then you can eliminate animal fighting.

I hope that Representatives and Senators will heed this message today and that they will join in support of this legislation. Please join with me today, and help us reach these kids before they go down this road."