I wrote earlier this week about my visit to Capitol Hill with Michael Vick, who at first blush may seem like the unlikeliest of lobbyists for legislation to build on the existing federal law against animal fighting and to make it a crime for an adult to attend a cockfight or dogfight or to bring a child to such a spectacle. We had a very productive series of meetings with lawmakers and staff about the Animal Fighting Spectator Prohibition Act of 2011, talking in particular to a large numbers of lawmakers aligned with the Congressional Black Caucus—and Congressional offices have been calling the bill sponsors, Reps. Tom Marino, R-Pa., and Betty Sutton, D-Ohio, to sign on as cosponsors. We also attracted enormous media attention to H.R. 2492. You can listen to our appearance on NPR’s All Things Considered or watch our appearance on Greta Van Susteren’s On the Record show.

There’s no debate about the cruelty associated with Vick’s crimes. We all agree what he did was deeply wrong, and it was right and proper for him to have been prosecuted and to have served time. The question is, now, should Vick speak out on dogfighting with The HSUS or any other group, or should every animal group just steer clear of him and not enlist him in the cause? For me, this was an easy call; we need all the tools at our disposal to turn around this problem, which is especially acute in urban centers throughout America. If Vick is willing to make a sustained commitment to this outreach, then I think it would be derelict not to work with him. We have a crisis in America with dogfighting, and I am afraid to say that outside of The HSUS’s major campaign against animal fighting, there are precious few resources devoted to attacking the problem. These problems don’t solve themselves. 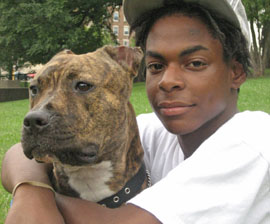 Even during the early phases of Vick’s prosecution, we were focused on broadening the debate beyond Vick, since the problem has always been bigger than just one man. I felt that leveraging his case in order to strengthen the laws, to build awareness in society about the severity of the problem, and to have targeted outreach to kids was precisely what we needed to do. Whether animal advocates trust him is a bit beside the point; the more relevant question is, will kids in urban communities listen to him and heed his message? Most of us animal advocates don’t need a lesson on animal fighting, but thousands of young kids in urban America do. They’re the ones we are reaching out to.

Since the Vick case came to light, we’ve helped strengthen laws in 35 states and also in the Congress, and now we are making a run at filling other gaps in the law. We’ve also paid out more than 90 rewards for information leading to animal fighting convictions, and assisted law enforcement in raiding countless fighting operations.

But my views about this matter are hardly unanimous. Here’s some of the feedback that came in on the blog and Facebook about the topic (we decided not to publish the most vitriolic of the posts, since they hardly seem appropriate or helpful).

You are doing great work Wayne. I do believe people can turn for the better. I, too, was suspicious about Vick, but if he can help make a positive impact in this area and help others to not go down the road he did, that's what matters most to me… thank you. —Deborah Jo Nellis

I just hope Michael Vick has changed but I still don't forgive him or trust him. —Rose Webster

Continuing to shun and judge Vick and others for their mistakes will just distance us from stopping more dogs from danger. It is more important to get these individuals on board with correcting the problem. Please, consider turning your anger into a catapult for creating positive change. Through every negative situation—no matter how bad it may appear—there is always something good that comes out of it… —Mina T. Watkins

I just don't think he is sincere. He's sorry he got caught and is trying to act like he has changed so he can make money playing football. I can't believe Nike and Subway would endorse a felon like Vick. —Lynn Hancock

I heard Wayne speak at a recent book signing in San Jose, and I had the opportunity to ask him about his personal, and the HSUS's current relationship with Michael Vick. I was moved by Wayne's heartfelt commentary to the audience, recalling his obvious initial reluctance to work with Vick. Seeing what this partnership has achieved so far is great progress. There is, perhaps, no better messenger for driving the intended message to the right audience. As Wayne writes in the book, "we have to embrace this kind of change…we're each on our own journey." —Celeste Bounds

Wayne, I heard the interview today with you and Michael Vick on NPR. Really inspiring and I'm so glad you decided to go with your gut and accept Vick's help, so that a more powerful message could reach and resonate with those who need to hear it. I would not have thought my own forgiveness of Vick would be possible, but I have come to believe he is sincere and that this is the most effective way for him to make a difference. Just as an 8-year-old boy was conditioned to dogfighting and cruelty, so may a grown man become conditioned to empathy, kindness, and a love of animals through his new vocation. —Deborah

Michael Vick is still giving lip service to convince people he has changed. I'm sorry, he's a waste of time and air as far as I'm concerned and the last person I would want to speak on my behalf. He's a joke. Never will you hear how sorry he is for causing so much pain and suffering to so many animals. If his little talks help young people to understand the gravity of the situation that's good, but how can they believe a man who is so insincere? —Patricia Kruebbe

I must say it took a lot of chutzpah to take on Michael Vick. I for one am proud of you and HSUS for doing this. I have seen local DC coverage of Vick talking to kids, and the look on their eyes tells me he gets through in a way no one else can. —Dianne Rhodes

I appreciate your partnership with Michael Vick. I heard both of you on NPR today. I truly feel that the "humane" aspect of all relationships comes from compassion and understanding. I think it's brave of both of you to work together and I hope that it will make a positive impact on the work to make sure animals are protected, loved, and respected. —Jenny Thompson

I appreciate that he could help reach people that might not listen to a nonprofit message. And I think it could be a good thing to help get the message out. But he lied on so many counts (to the public, to the commissioner) and only showed remorse when caught. We can work to forgive, but how can we trust him? —Jeff Wiedner

Being on Capitol Hill on Monday campaigning for cosponsors for this Animal Fighting bill was amazing and enlightening. (Successfully getting one congressman to sign-on made it especially exhilarating!) The more I've learned about this federal bill (and animal fighting prosecution challenges), the more convinced I am that HSUS did the right thing in engaging Vick's involvement. In fact, it was an ingenious idea. —Katherine McGill