Last week, I was in Tennessee, and, among other topics, addressed the need for lawmakers to fortify the state’s anemic anti-cockfighting law. I singled out Rep. Frank Niceley, the chair of the House Agriculture Committee, who has repeatedly blocked the legislation. Rep. Niceley has called cockfighting a Southern tradition and cited its value in promoting tourism.

In some ways, Niceley is right. Anemic cockfighting laws are a draw. Raid after raid—including federal raids of major Tennessee pits—turns up a harvest of out-of-state cockfighters in search of some sort of amnesty program. Is that really the kind of tourism that Rep. Niceley wants—roving bands of rag-tag cockfighters flocking to the Volunteer State so they can sidestep their home state’s stronger penalties? Perhaps Niceley thinks that Tennessee should weaken its drug and prostitution laws to promote more business from folks involved in those enterprises, too. 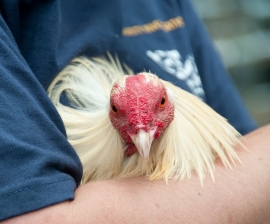 The state that gets the prize, however, for the weakest anti-cockfighting law is Alabama, where the maximum fine is $50. The penalty is unchanged from 1896, when the law was enacted and when $50 actually meant a little something. The HSUS has worked with media outlets to expose the large, semi-underground cockfighting subculture in the state, in order to demonstrate to lawmakers that our concern is not just an abstract one.

This is the same AGBA that an HSUS investigative consultant documented was raising money and selling memberships at an illegal cockfighting pit in Chilton County earlier this year. That pit was shut down by the local sheriff just a few weeks after we infiltrated the pit. And it’s the same outfit that spends tens of thousands of dollars each year for lobbyists to stop any efforts to pass a stronger cockfighting law.

The Decatur story goes on to quote Dr. Tony Frazier, the Alabama state veterinarian, as saying he was supportive of the last year’s anti-cockfighting bill, and that’s a good thing. But Dr. Frazier also indicated that he had solicited an outside group to help find homes for roosters seized in a recent cockfighting raid. And that group was, again, the Alabama Gamefowl Breeders Association, which is nothing but a front group for cockfighters.

The Alabama Gamefowl Breeders Association is an organized criminal association. No state veterinarian or respected university should get close to it, and they certainly ought not support it or consort with it. And it’s precisely when lawmakers or other state or university officials get mixed up with these people that we get such feeble policies with respect to illegal animal fighting.