Better Days Ahead for Farm Animals in Ohio

Some of the most important progress comes about when we align ourselves with surprising and improbable partners. In Ohio, in 2010, The HSUS—and many of our traditional allies such as Farm Sanctuary, Mercy For Animals, the Toledo Area Humane Society, the Ohio Environmental Stewardship Alliance, and others—waged a campaign to place a measure on the statewide ballot to phase out a variety of the most inhumane factory farming practices.

As readers of this blog know, shortly before the signatures were to be turned in, we sat down with then-Gov. Ted Strickland, the Ohio Farm Bureau, and other agricultural commodity groups in the hopes of finding a compromise. It was a difficult and wrenching process, but in the end, we came to an agreement—an eight-point animal welfare agenda for the state of Ohio. It was memorialized with a handshake and a signed agreement, and it averted a costly and bitter ballot initiative vote. It also set the state on a path toward implementing many of the reforms we sought. 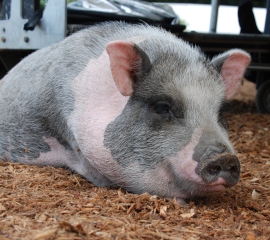 Yesterday, the new regulations on farm animal welfare took effect. In short, the new rules phase out the cruel practices of confining calves in veal crates and breeding sows in gestation crates; phase out tail-docking of dairy cows; place a moratorium on permits for new battery cage confinement facilities for laying hens (which has already blocked the permit for a proposed 6-million battery hen complex in Ohio); ban strangulation of farm animals and mandate humane euthanasia methods for sick or injured animals; and ban the transport of downer cows for slaughter.

John Dinon, executive director of the Toledo Area Humane Society and president of the board of directors of Ohioans for Humane Farms, summed up the good news: "Ohioans should be proud that our state will be implementing these meaningful animal welfare reforms, and I am extremely grateful to all the Ohio animal advocates who gathered signatures to make this day possible."

Implementing these reforms in Ohio via any pathway other than a ballot initiative would have been unthinkable just a couple years ago. But if our movement is going to succeed, we need to open up dialogue and to turn adversaries into allies. We need to engage in problem solving and be open to the possibility that we can sit down with people with a different orientation and set of experiences and find common ground. If we are forever locked in battle, it’s going to be a long fight for all of us, in this and other cases, with an uncertain set of outcomes for the animals.

I am grateful to our partners and supporters who helped achieve these advances in Ohio, including the farm groups whose leaders have been true to their word and whose participation in this rule-making has been essential. I feel that the nation is treating farm animal protection more seriously, and one need only look in Ohio to see the results.