Yesterday, while we were celebrating the important Institute of Medicine report on chimp research, a team of cockfighting experts from The HSUS joined Galveston County, Texas, law enforcement in a raid on a large operation allegedly raising roosters for cockfighting. 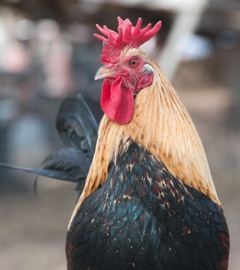 Oleander Game Farm has existed for decades, but law enforcement could not shut it down because of loopholes in the Texas cockfighting law. This year, The HSUS convinced the Texas legislature to strengthen the law so that possessing a rooster with the intent to fight is now illegal in Texas. In a holiday gift to roosters, Lt. Joel Caldwell of the Galveston Police Department became the first law enforcement official in Texas to use the part of the new law that targets these operations that exist to raise birds for fighting.

Caldwell assembled an impressive team of officers and executed a search warrant on Oleander Game Farm, leading to the discovery of a cockfighting pit, dozens of knives typically used in cockfights, numerous cockfighting magazines, and schedules from at least three cockfighting pits (see photos). One should no more be allowed to have a production facility for fighting roosters than a person should be allowed to run a cocaine manufacturing plant. We won’t ever be able to stop illegal animal fighting if we don’t crack down on the people who breed and sell, and set the animals to fight.

Under the old Texas law, it was perfectly legal to be a spectator at cockfights or to raise roosters for fighting. We conducted a lengthy investigation into the cockfighting industry in Texas, showing that this criminal activity was pervasive.

Our investigation led to raids on cockfights in Dallas, Tyler, and Gunter, as well as exposés in The New York Times, The Texas Tribune, and on ESPN’s E:60. While the old law was deficient, these raids put a spotlight on the issue and demonstrated the need for legislation that would allow law enforcement to challenge and cripple the industry. The new law classifies cockfighting as a state jail felony and outlaws attending fights, possessing animals with intent to fight, possessing cockfighting weapons, or allowing one’s property to be used for cockfights.

Passing strong animal cruelty laws is an important first step. Putting them into effect is the necessary second step—and we are grateful to work with humane leaders in the ranks of police and sheriff’s departments nationwide to get these laws enforced.