Tigers, Leopards, and Other Exotics Saved from Neglect

Our Animal Rescue Team has saved cats, dogs, horses, rabbits, and even rats from all sorts of crises and cruelty situations. But this week’s main event was a particularly exotic mission: rescuing three tigers, two leopards, three cougars, two wolf-hybrids, and a macaque monkey.

HSUS responders deployed yesterday to the Collins Zoo in Mississippi, an unaccredited roadside facility where our undercover investigators had previously documented injured and emaciated animals and flimsy enclosures. We shared our findings with state officials in 2010, submitted legal complaints, and have been working with them ever since to address the problems. Ultimately, the Mississippi Department of Wildlife, Fisheries, and Parks decided to seize 11 exotic animals and call in The HSUS to coordinate animal handling, transportation, and temporary placement with qualified sanctuaries. 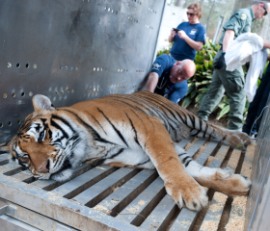 Kathy Milani/The HSUS
One of the sedated tigers being prepared for transport.

Responders found the exotic animals in small enclosures with little enrichment to meet their needs to play and exercise. One leopard suffers from wounds on her leg and tail, and the male tiger appears to be overweight, probably a consequence of an improper diet and a cramped cage that prevented proper exercise. State officials also seized a number of native animals, such as snakes and turtles.

Safely transporting the large, potentially dangerous animals was no small feat. A veterinarian from the accredited Jackson Zoo and several other vets experienced in handling exotics worked to sedate the animals, microchip them for identification, and draw blood samples to assess their health. We carefully transferred the animals to special transport cages, then loaded these cages onto large trailers. Take a look at these photos to see how the team came together to transport animals such as a male tiger weighing more than 400 pounds.

This rescue is a reminder that most people have no business having dangerous and difficult-to-keep exotic animals; it almost inevitably turns out badly for the animals. The killing of tigers, wolves, and other exotic animals released by a man in Ohio brought the issue into the national spotlight, and The HSUS has said for years that dangerous exotics can only be safely and humanely cared for in qualified sanctuaries and accredited zoos.

Our Cleveland Amory Black Beauty Ranch is caring for the tigers and wolf-hybrids until their custody is determined, while Carolina Tiger Rescue will be providing sanctuary for the leopards and a cougar, Wildlife Rescue & Rehabilitation will house another cougar, and Born Free USA Primate Sanctuary will care for the macaque.

There are about 200 accredited zoos in the country, but there are as many as 2,000 unaccredited facilities. There’s more work ahead and millions of dollars that our movement must spend in providing lifelong care as a consequence of the reckless acts of people who get in over their heads and then foist their problem on somebody else.