‘The Grey’ Plays Up Misconceptions against Wolves

In “War Horse,” director Steven Spielberg treated his audience to a compelling case of historical fiction, grounding his World War I saga of a boy and his horse on a set of common facts―including that the Germans and the United Kingdom were combatants and horses had a major role in the conflict. In “The Grey,” director Joe Carnahan makes up something out of whole cloth in his drama about stranded oil riggers who are hunted as intruders by a pack of wolves.

Fiction is a perfectly respectable form of storytelling, but demonizing animals, in this case wolves, has destructive consequences―especially at a time when a renewed persecution of wolves in the United States places the lives of these creatures at more at risk than ever. 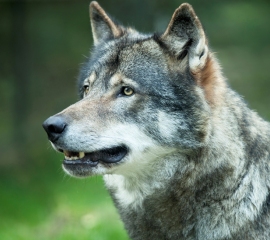 The historical record is unambiguous. Through the centuries, European settlers and generations of their descendants have slaughtered wolves, nearly exterminating them from the lower 48 states. There were federal hunters and trappers who killed wolves almost without limit. There were state-sponsored bounties. And ranchers and hunters did their own ruthless killing of wolves.

Now after modest recovery efforts over the last 35 years, wolf populations in the Northern Rockies and Upper Great Lakes have been removed from the list of federally protected species. Anti-wolf hysterics had a big part in the de-listing actions, and now these forces are clamoring for renewed widespread killing. Trophy hunters continue to make irrational claims about the impacts that wolves have on deer and elk, while ranchers exaggerate the threat that wolves pose to cattle and sheep. These notions are not grounded on fact, but on the mythology of the wolf as a rapacious predator who slaughters everything in its path.

Let’s hope “The Grey” is a horrible flop, and doesn’t resonate with people like “Jaws” did. Putting aside its commercial prospects, “The Grey” does rival “Jaws” for its sheer ignorance and folly in terms of natural history and the human-animal relationship. The drama in the film revolves around bloodthirsty wolves hunting down humans as prey, even though there’s almost nothing in the historical record to reflect that wolves are any threat at all to people.

Director Joe Carnahan reportedly bought four wolves from a trapper and convinced the cast to eat wolf meat while on the set. The cast members, encouraged by Carnahan, apparently ate the meat in a preposterous attempt to create the atmospherics that real-life characters might find themselves in.

Even with protection under the Endangered Species Act for some wolves for 35 years, wolves now occupy less than 5 percent of their historic range in the lower 48 states. There are some 4,000 wolves in the Northern Great Lakes and fewer than half that number in the Northern Rockies. There is abundant scientific evidence that these animals have had enormously beneficial ecological impacts in the range they inhabit. And they are not a threat to people.

Wolf haters have staked out an anti-science, anti-environment, anti-animal posture. Hollywood has no business adding to the hysteria. Do stay away from this box office stinker. Go rent “Babe” or “Bambi” or “Free Willy” as an act of protest, or spend a little extra time with your dog, who as it happens is a descendant of these dreaded wolves.