Horse Diving Act Belongs Only in the History Books

Breaking News: Just after I posted this blog, the Associated Press reported that the owner of Steel Pier has canceled the horse diving spectacle! No need to write the governor. Celebration is in order.

Though hardly the most harmful or cruel thing I’ve come across in my time as CEO of The HSUS, “horse diving” is one of the most stupid, smacking of the worst kind of hucksterism and snake-oil showmanship. 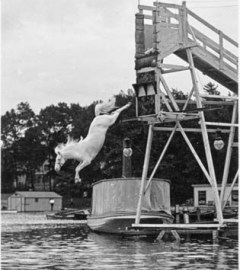 This bizarre spectacle of horse diving became popular in Atlantic City in the 1920s―with horses forced to walk up to the end of an elevated platform, which then drops and sends the frightened animals plummeting 30 to 40 feet into a tank of water. It went the way of other absurd, cruel, or degrading acts, like pygmies or other native people placed on display at exhibits or shooting small people out of cannons. But it was not stopped until the 1970s in response to concerns about animal welfare. An attempt to revive it briefly in 1993 ended after public outcry. Yet the owners of the Atlantic City Steel Pier have just announced a plan to bring back this cruel attraction in a few months.

Diving acts endanger the safety of horses and subject them to potentially abusive situations during training, transport, and performance. Animal blogger John Woestendiek described the plan perfectly by calling it a “stunningly stupid return to yesteryear.” Atlantic County SPCA President Nancy Beall was recently quoted by Philadelphia’s NBC station saying, “I think it’s disgusting and I think it’s cruelty to animals.” The HSUS has long opposed horse diving acts, and our affiliate The Fund for Animals cared for a former diving horse named Shiloh at Cleveland Amory Black Beauty Ranch for years.

When forced to perform in diving acts, horses can show signs of stress and trauma such as hesitating repeatedly before sliding off the platform, climbing out of the water visibly disoriented, and stumbling afterwards. We are writing to Gov. Chris Christie and urging him to exercise any authority he has to call off the plan and speak out against the practice. [Editor's Note: The event has now been canceled.] Please make your voice heard today and urge him to do his best to see that this crass exhibitionism finds no home in Atlantic City.