Talk Back: Horse Soring Investigation Shines a Light on Abuse

In the mid-1960s and early 1970s, there was a wave of federal lawmaking for animals, including such well-known statutes as the Animal Welfare Act (1966), the Marine Mammal Protection Act (1972), and the Endangered Species Act (1973). In 1970 came the Horse Protection Act. That law was designed to end the practice of horse “soring,” in which horses’ hooves and lower leg areas are intentionally injured in order to cause them pain and distress so that they step higher and more dramatically in shows, exaggerating their natural high-stepping gait and giving their trainers and owners an advantage. In spite of the law forbidding their conduct, too many trainers kept on with their abusive and now illegal practices, and law enforcement did not put a stop to it. And within the last 40-plus years, there hasn’t been a single upgrade of the law—either to strengthen penalties or to fortify the prohibitions on the underlying criminal behavior. 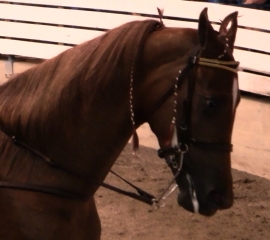 Earlier this month, I wrote about a groundbreaking horse soring investigation by our HSUS undercover team that led to federal criminal indictments of a kingpin within the industry, along with the rescue of eight horses. Our undercover footage is truly shocking stuff, but federal prosecutors have asked us not to release it yet. When it is released for viewing by the public, there will be a new level of awareness in the nation, because the intentional cruelty involved is undeniable. The perpetrators of this particular cruelty are every bit as bad as cockfighters or dogfighters, with the only difference being that they operate within a business enterprise that has enjoyed some social sanction, and that gives them the patina of legitimacy.

I described some of the instances of cruelty our investigator found in my announcement of the indictments, and the cruel practice of soring shocked many of you. I heard from a few people with firsthand knowledge of the horse show industry and its abuses, and they were especially glad to see the prosecution of a high-profile trainer such as Jackie McConnell, who has won countless awards in the field, while presumably relying on the very practice this nation sought to prohibit more than forty years ago.

The HSUS has uncovered a lawless, cheating subculture of cruelty within this industry, and it’s time for a renewed effort to crack down on this unconscionable mistreatment of horses, through stronger enforcement, better legislation, and serious self-regulation by the industry, among other remedies. There are a lot of good people in the industry, and we want to work with them, with the USDA, and with the Congress to stamp out the rampant abuses that have gone on for too long.

Here are a few of your comments:

Thank you for helping horses. As a horse owner (one of which is part Tennessee Walker) and lifetime horse lover, these practices sicken and anger me to the point of rage. I wish these trainers could feel how these horses feel, though I know that will never be possible. Keep shining the spotlight on abusive practices and working to make things better. ―Anne Foster

I used to own, train and breed Tennessee Walking Horses for pleasure riding. I went to many shows as a spectator and often hoped that the trainers that I knew did not sore the horses. They are truly a beautiful breed flat-shod and it saddens me to think of the pain and suffering they endure from trainers who care nothing about the horse and are in it for the money and recognition. Good work, HSUS! ―Debbie Clay

I never knew what horse soring was until now. It's amazing how sneaky people can be when it comes to making the almighty dollar. Thank you for exposing the brutality behind the soring… ―Joan

I believe perhaps one of the most dangerous abuse with animals is that which has become “the accepted,” the condoned, and promoted by professionals in the field! My first professional experience with horses in the U.S. involved attending a show where I saw, and actively questioned, “TW,” Saddle-bred and Paso Fino abuse! From the distortion of their feet to the doctoring of their tails, and the use of sticks and fear tactics to propel the “showy” horse across an arena….I am so glad that trainers and breeders are now being made accountable for this corruption and intolerable abuse of a beautiful creature…go HSUS! ―Stormy Logan

My prayers are starting to be answered, thanks to your team of caring animal lovers. I look forward to the day when all the pads and chains come off and the physical abuse is ended. May the Lord bless you for continuing to work for these kind, humble horses. ―Judy Hand

Why do we need to see horses stepping in such an unnatural way anyway?  Thank you for uncovering this. The horses would thank you if they could. ―Kate

They need to investigate ALL "gaited" trainers because these practices are common and have been going on for many, many, many years! ―Paula Sklar

Good! It's about time that these trainers have to be accountable for the horrific things they do to these gaited horses. I think the owners should be held accountable too. ―Ann Joly

Thank you for your continued work to stand up for animals and against abusers! I will continue to do my part as well. ―Dawn Funk Thie