A Wing and a Prayer: Rescuing More than 100 Parrots

Our Animal Rescue Team works with local law enforcement and humane agencies to help and rescue animals in distress, whether from puppy mills, animal fighting rings, natural disasters, or other cruelty and neglect situations. Our team is used to dealing with all kinds of challenging scenarios, and last week was no exception. 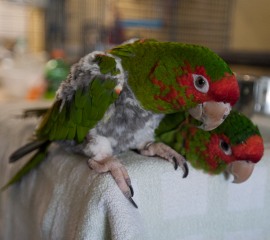 In this case, the great folks at the Humane Society of Greater Dayton called The HSUS in to help seize more than 100 parrots and other birds from alleged neglect and cruelty in Moraine, Ohio―a suburb of Dayton. The birds were living in filthy, nearly barren cages in a rodent-infested storefront. Many lacked access to clean water and fresh food; others appeared to suffer from chronic illness and injury.

Adam Parascandola, director of animal cruelty investigations for The HSUS, told me that the air inside Wings Over the Rainbow was so noxious that he had difficulty breathing. Parrots have extremely sensitive respiratory systems―it’s hard to imagine how they could live in this kind of filth and squalor, day in and day out.

HSUS rescuers worked with volunteers to carefully remove each of the birds from the building and load them onto our rescue vehicle for transport to the emergency shelter, where they’re now receiving veterinary care. Adam described several heartbreaking scenes from the several hours they spent inside that store: a mitred conure who would not stray from his severely crippled mate; a parakeet with what appeared to be a tumor half the size of her body; dozens of nearly featherless birds; and one cockatoo missing her entire upper beak.

How many of these conditions and ailments were due to neglect or cruelty at Wings Over the Rainbow is still unknown. But it’s fair to say that many were the unfortunate outcomes of a life in captivity.

When I visited the Central Virginia Parrot Sanctuary in 2009, I met several birds who habitually plucked their feathers from psychological stress they’d endured at some point while someone’s pet. Sanctuary executive director Matt Smith (also on the scene at the Ohio rescue last week) says that parrots are highly intelligent and social. They have complex language and problem-solving skills and form deep emotional bonds with other birds.

It’s their beauty and their keen minds that capture the imagination of would-be owners. Yet these birds often live in terrible conditions even with a well-intentioned caretaker. Without adequate psychological and emotional stimulation, parrots frequently develop psychological disorders. Frustration, feather-picking, and other behavioral issues are common.

The presence of bird-mills and bird sellers catering to an expanding market for exotic birds has resulted in a large-scale animal welfare and practical challenge for the humane movement. Parrot rescues and sanctuaries are overwhelmed with birds relinquished by owners who had no idea about what they were taking on in getting a highly intelligent, demanding animal with a life expectancy of 80 years. Wings Over the Rainbow brands itself as a sanctuary, and Matt believes that many other similar operations exist around the country: independent groups that may have begun with the best of intentions, but they lose control of the situation and things turn for the worse. In just a few years, it has become a problem of epidemic proportions.

“Part of the answer is accreditation,” according to Matt. “Because the number of parrots in need has grown exponentially in the past decade and because there is comparatively very little financial support for even the best of organizations operating in a limited capacity, parrots will continue to find themselves languishing in cruel and neglectful situations.”

You can help parrots by supporting carefully vetted sanctuaries and rescues. And if you’re interested in providing a home to a parrot, consult with a reputable rescue group.