U.S. Rep. Steve King, R-Iowa, gives very literal meaning to the term “backward thinking.” In a telephone town hall last night, Rep. King defended his campaign to block pending federal legislation to crack down on dogfighting. Specifically, the legislation he tried to defeat makes it a crime for an adult to attend or to bring a child to a staged fight between animals. 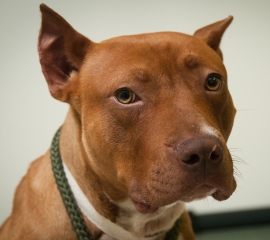 Kathy Milani/The HSUS
A dog rescued from a fighting ring.

It’s hard to believe anyone could come up with such a rag-tag defense of animal fighting–where drugs, illegal gambling, and sometimes even human violence are mixed with animal cruelty. Apparently King believes more than 30 Iowa county sheriffs and city police chiefs who have endorsed the federal anti-animal fighting measure are as wrong as The HSUS, along with 205 bipartisan cosponsors in the House of Representatives. And also the U.S. Senate and a majority of the House Agriculture Committee members who favored the anti-fighting amendment. And very specifically with Iowa’s entire Congressional delegation–Sens. Tom Harkin and Chuck Grassley and all of the other House members, including Republican Tom Latham.

That’s not the only measure that Rep. King has taken an extreme position on. He says he’s for states’ rights, but he is the author of an amendment, adopted during the recent House Agriculture Committee consideration of the farm bill, that seeks to nullify a raft of statewide laws―his target being laws to protect animals, either duly approved by state lawmakers or directly by voters, and also perhaps nullifying laws on environmental protection, worker rights, food safety, and other issues. Message to Mr. King: States’ rights doesn’t mean protecting the states' rights to pass only those laws you agree with. It means adhering to a broader constitutional principle of sovereignty for the states.

Rep. King wants to be sure that there are no federal or state standards governing the treatment of laying hens. He opposes the federal hen bill backed by the egg industry and animal protection groups. King wants to make sure that if a farmer crams a laying hen into a 48-inch space, and it happens to be legal in Iowa, other states must accept eggs from that type of unethical farmer. I am no constitutional scholar, but I am pretty sure there is nothing about federally compelled commerce in the 10th Amendment, or anywhere else in the Constitution.

Dogfighting, extreme confinement of laying hens, and an attack on states’ rights. What a guy.