One year ago today, in Zanesville, Ohio, Terry Thompson released nearly 50 tigers, lions, bears, primates, and other animals from cages at his private menagerie, and then he took his own life—leaving a scene of chaos and confusion for law enforcement officials. With dusk approaching, the local sheriff made a decision to authorize the killing of the free-roaming animals, as a matter of protecting human safety. Professionals did tranquilize a half-dozen animals. 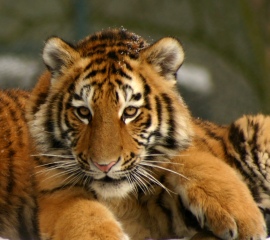 That awful drama was just one in a string of horrible incidents involving powerful wild animals being kept as pets in Ohio in recent years. But it was so over the top and so tragic that Ohio lawmakers could no longer turn down our pleas to enact a comprehensive statewide statute to forbid private citizens from acquiring these animals as pets or roadside attractions. The legislature, prodded by Gov. John Kasich, passed a strong law, and that statute took effect in September.

Alabama, Nevada, North Carolina, South Carolina, West Virginia, and Wisconsin are now the only remaining states that have no rules on keeping dangerous animals.  And many other states have loopholes that allow private citizens to keep dangerous wild animals for a variety of purposes.

Nationwide, The HSUS has uncovered evidence that at least 70 exhibitors currently or recently engaged in the harmful practice of allowing the public to handle big cats, bears, and/or primates. Records also show that extraordinarily young animals, such as tigers who are only a few days old, are being transported to and by exhibitors for purposes of public handling.

For fees ranging from $10 to $500, members of the public can pet, feed, train, pose with, play with, and even swim with wild and exotic animals. After just a few months, many of the animals are discarded at poorly run roadside zoos, pseudo-sanctuaries, or the exotic pet trade. Some animals used temporarily for public handling, such as black bears and African lions, may even be slaughtered for the exotic meat market. Breeders and dealers keep churning out babies to fuel this business.

Today, The HSUS, World Wildlife Fund, International Fund for Animal Welfare, The Fund for Animals, Born Free USA, Big Cat Rescue, and the Global Federation of Animal Sanctuaries filed a legal petition asking the U.S. Department of Agriculture to prohibit public contact with big cats, bears, and primates under the Animal Welfare Act, regardless of the animals’ age. While exhibition is regulated by the USDA, public handling of these animals is largely unmonitored. USDA enforcement policies currently allow the harmful practice of handling infant animals to flourish.

To facilitate public handling, the animals are separated from their mothers shortly after birth—a cruel and unhealthy practice that can lead to lifelong physical and psychological problems and even death. Young animals with weak immune systems may be exposed to deadly diseases and subjected to stressful conditions associated with transport, rough and excessive public handling, as well as physical abuse from handlers attempting to keep animals under control.

This practice puts animals at risk, endangers the public, and creates a burden for both law enforcement and sanctuaries. Accredited sanctuaries for wild animals are shouldering the burden created by an industry that continuously breeds and dumps long-lived animals with specialized, costly needs. For example, it may cost up to $10,000 per year to provide food and veterinary care for a single tiger. The total costs adds tens of millions of dollars for the animal welfare community to bear. This is an unfunded burden, and it’s just one more reason why the states and the federal government need strong policies to prevent the trade and private ownership of dangerous exotics.

Please sign our petition urging the U.S. Department of Agriculture to act quickly on our proposed changes to federal rules that would put an end to the harmful practice of allowing the public to handle big cats, bears, and primates.