Some Broad Thoughts on Our Movement

The work of The HSUS is grounded on a couple of core principles: animals have the capacity to suffer, and we humans have the capacity to help them. We hold all the power over animals and our choices and conduct have enormous consequences for them. And it’s hardly some far-off or abstract concern, since they live in our communities, as pets and wild neighbors, and they are enmeshed in so many sectors of our economy and society, whether in food production, fashion, science or wildlife management.

Where warranted, we at The HSUS invoke moral conviction to assure better outcomes for animals, placing principle ahead of selfish concerns, whether profit or whim or habit. In some cases, exercising moral choices may require some sacrifice, whether it’s seen in higher prices for products in the marketplace, or some tangible inconvenience in our lives. But to make a modest or a meaningful sacrifice to do good is a mark of our humanity, not some naïve or impractical notion. It’s a moral imperative when the well-being and even the survival of others rest with our routines and choices.

More often than not, these choices are easy, and hardly require any sacrifice at all. We can meet the necessities of life and hardly notice the difference. With the genius and creativity of the human mind, we can devise alternatives to cruel treatment of animals – and these alternatives often provide us with equivalent or even superior options.

Fur-wearing is a classic case example. Fur itself is beautiful, and for keeping warm it has practical value. But today, we have natural fiber and synthetic alternatives that can match fur for style and warmth. If we choose coats not made of fur, our lives are not diminished in any way. We gain all the comforts, but we do not needlessly extinguish 20 or 40 animal lives for a single coat. In this case, human innovation has made the moral path obvious, and it’s up to us to travel down it.

Take the case of our ongoing campaign to require that sport hunters swap out lead ammunition in favor of copper or steel. The evidence suggests that millions of wild animals – from as many as 130 species – die from lead poisoning after feeding on carcasses laced with lead shard left behind by hunters, or in some cases, by foraging on lead pellets left on the ground. The less harmful types of shot are already available for sale and they have all the necessary ballistic properties. A simple purchasing preference for less toxic or non-toxic shot does the trick. 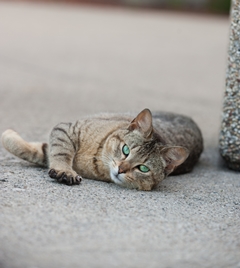 Some wildlife issues are more complex, but that doesn’t diminish the need for active problem-solving. In recent months, with the release of a study from the Smithsonian Institution that sought to quantify the impact of free-roaming cats on wildlife, there’s been a high-pitched debate about the issue. We are one of the few non-profit organizations on the planet with world-class staff and programs devoted not only to helping cats and other companion animals, but also wildlife (including running the nation’s largest wildlife rehabilitation center), so we think we are uniquely suited to guide and lead the debate.

Cat predation on wildlife is a serious issue, but the answer is not to capture free-roaming cats and kill them – which some wildlife enthusiasts wrongly and impulsively suggest. Rather, it’s to encourage responsible pet ownership – including spaying and neutering and, to the greatest extent practicable, keeping cats indoors. And for free-roaming cats, it involves active management of colonies through trap-neuter-and-return programs. In this case, there are no simple answers, but The HSUS brings moral concern for cats and wildlife, and a realistic view based on long and practical experience with management issues.

The HSUS reminds thoughtful citizens that there are a dizzying number of moral choices we have when it comes to animals and our interactions with them. These are not moral burdens, but moral opportunities. By demonstrating mercy and intelligence, we have the power to exert a lasting, healthy, and beneficial impact on the lives of other creatures. And it’s that kind of transformational change that The HSUS, through decisions of every supporter like you, seeks to bring to life.