The Beagle Has Landed

There’s a dog in my office, and she’s not a foster pet or a visitor. I adopted her on Saturday, and now she’s a cling-on. And Lisa and I are very happy about it. 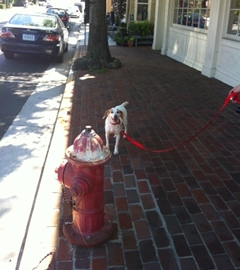 Spying a potential opportunity at a fire hydrant in
Middleburg, Virginia.

She’s a Beagle mix, and came from a shelter in rural Virginia. She may have been a discarded hunting dog, since rural Virginia shelters are full of them. Lost Dog and Cat Rescue Foundation, based in northern Virginia, pulled her from the shelter, and after spaying and vaccinating her, put her up for adoption at an event at the Fairfax PetSmart on Saturday. This was her ninth adoption event, and somehow she’d been passed over on these prior occasions. It was our good fortune, but I’m still mystified that no one scooped her up before. She’s got such a gentle disposition, and is pretty as a picture.

She’s now splayed out on her doggie bed right behind me in my downtown D.C. office. She’s probably about six years old, and her “maturity” cinched the deal for us. We wanted to get an older dog, since they are tougher to place.

It’s been some weeks since our precious cat Mungo passed on. Her sister died about a year ago, so the apartment has been feeling empty and we’ve been missing them terribly. It was time again to populate our home with another little being to fill the void that every one of you who has kept pets knows all too well.

Lost Dog and so many other rescue groups are doing such great life-saving work. They are typically pulling animals from shelters, and then getting out into the community to encourage people to get a companion and save a life – a double bottom-line benefit. The cooperation between shelters and rescue groups, and the movement of animals between them, is part of any successful plan to eliminate unneeded euthanasia. According to our survey work with Maddie’s Fund and The Ad Council, there are about 17 million people in the market for companion animals this year. Only about a quarter of them will get a dog or cat from a rescue or shelter. If just an additional two or three million of them went to an adoption event hosted by PetSmart or Petco, logged on to Petfinder.com, or went directly to a shelter or rescue group to adopt a homeless dog or cat – an easy choice, since there’s an abundance of great, well-socialized, vaccinated, sterilized animals at these sources – we’d have the national problem of euthanasia of healthy and treatable animals licked. Local organizations could spend more time on the wider range of animal protection issues, and not be bogged down, as they’ve been for a century, with the plight of homeless animals. In short, just a small percentage of people who want an animal in their life can make an intentional choice and help us get to the finish line.

This little one doesn’t have a name yet. If you have suggestions, we’re all ears. And she’s all ears, too, as you can see. We’ve got to get the name settled by midnight tonight, as a practical matter for her and for her proud pet parents.