There are 367 dogs whose lives turned around so fast they may have whiplash. On Thursday night, in small hamlets in Alabama and Georgia, these animals who were staked to heavy chains, had passed another sweltering day – many without protection from the sun, without enough food, and with too much fetid water staring them in the face. The older dogs had been scarred from the fights. One dog had been vomiting and then scrounging on the remains to get enough energy to stand. 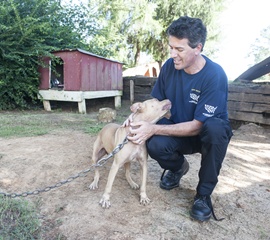 Kathy Milani
Me, with one of the rescued dogs.

By Friday night, they were in a well-ventilated building, off of their chains and living in kennels, with sawdust beneath their feet, plenty of clean water and healthy food, and Kongs for enrichment. Vets had fixed their wounds and cleared away the fleas. They were with people who would remove their waste so they could be comfortable and breathe the air. Most importantly, they were with people who would rather die than see dogs in a fighting pit.

Such is the power of ideas, the acceptance of ideas, and the rule of law.

Dogfighting has been a curse for a long time, but it was either considered a low-level concern that rarely warranted intentional action in a world brimming with problems, or it was just a sight unseen. The victims couldn’t speak out, and if we can’t see the problem or mistakenly believe the matter has already been settled, then who can hear and who will care?

We at The HSUS care, and over the last quarter century, we’ve changed the legal framework in this country, working to make dogfighting a felony in all 50 states. In the mid-1980s, only about five states had felony level penalties. By 2008, it was all 50 states. In 2007, it became a federal felony.

And year after year, we’ve worked to train thousands of law enforcement personnel on investigating this criminal behavior and to remind law enforcement and prosecutors that when you see dogfighting in action, you see people who typically have no quarrel with breaking the law. Turn over the rock, and you’ll find drugs, guns, and violence. On Friday, after rising at 3 a.m. to ready ourselves for the raids and seizure, it was sure nice to have the Federal Bureau of Investigation, county SWAT teams, and the U.S. Attorney for central Alabama on the same schedule and on the same team. With our colleagues at the ASPCA and local animal welfare agencies, the team seized dogs from 13 locations.

The law was on our side.

And just as the dogs lives changed overnight, so did the lives of the alleged dogfighters. They had been living in comfortable homes. Now they are in prison, waiting for their cases to be heard, without freedom and all that comes with it.

That’s the consequence of cruelty today. And it’s as it should be.

We are working to build the legal framework to stop other despicable, unacceptable acts, whether it’s cockfighting, shark finning, seal clubbing or captive hunts. These are all forms of cruelty. Yesterday, they were sanctioned and accepted. Tomorrow, in an enlightened society, they will be illegal and considered morally bankrupt. They will be the markers of selfishness, greed, and the old, archaic ways of the world.