Yesterday, a federal appellate court rejected arguments from business groups that are challenging California’s ban on shark fins as discriminatory and at odds with federal fisheries laws. Surprisingly, the Obama administration had filed a brief in support of the shark fin dealers and their bid to immediately enjoin implementation of the California law. The panel from the Ninth Circuit Court of Appeals affirmed the trial court’s January decision to keep California’s shark fin law in place until a final judgment on the legal claims from shark finning proponents is issued. It’s a big preliminary win for the state of California and for The HSUS, which considers the sale of shark fins to be in the same category as selling ivory trinkets or elephant tusk – all cruel, unnecessary and deeply wasteful of animals who are vital to their ecosystems and to ecotourism. 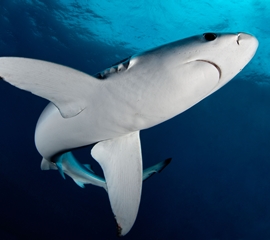 Meanwhile, we are making great gains globally on the shark finning issue through Humane Society International. Two days ago, India’s Ministry of Environment and Forest, which operates under the authority of the Central Government of India, brought into force a ‘fins naturally attached’ policy to prohibit shark finning. The policy makes it illegal for any fishermen to land sharks anywhere on the coasts of India without their fins naturally attached to the body.

Given that India has been recognized as the second largest shark fishing nation – from individual fishermen hauling all the sharks they can accommodate onto narrow hand-built catamarans to large fishing fleets with dedicated shark fishing trawlers – this is a monumental victory.

This victory came about because earlier this year, HSI India began dialogue with India’s Ministry of Environment and Forests in collaboration with the Association of Deep Sea Going Artisanal Fishermen, the country’s largest shark fishing community.

More than 66 species of sharks are reportedly found in the Indian seas. Fishermen have killed millions of sharks each year in Indian waters to export the fins to East Asia, Southeast Asia, and even Europe and the United States. Reports from India’s Marine Products Development Authority have shown that India’s export of shark fins in the year 2010-11 to China alone was 101 metric tons.

In spite of what may be unsustainable levels of killing, India had not put into place any concrete measures for the management of its shark populations. Even India’s Wildlife Protection Act, which offers the highest level of protection to 10 species of sharks, including the whale shark, had so far proved insufficient for safeguarding these animals from commercial killing. By imposing the highest level of penalties upon any fishermen found with detached fins, the Ministry has taken bold steps forward in safeguarding sharks.

While the government of India has made a bold proclamation, the Obama administration is moving in the opposite direction, specifically by seeking to nullify nearly a dozen state and Pacific territory laws to crack down on the sale and possession of shark fins. The ruling by the federal courts is a boon to our efforts to defend state laws, and we hope the administration takes this important signal from the courts and gets back on the right side of this issue.