I often say that when you do bad things to animals, or promote bad policies toward them, you can expect major adverse effects for the whole of society. In recent days, we learned about the horror of al-Shabab mowing down innocent civilians at a mall in Nairobi – with more than 70 people killed and hundreds injured. What most people don’t realize is that al-Shabab, based in Somalia, finances much of its terror plan by selling ivory from elephants who are killed for profit by the group’s militant members. The elephant poachers and the terrorists are the same people.

In the United States, animal cruelty and human terror are not linked, except in some extreme cases. But when you find animal cruelty, you commonly find a host of related problems – from domestic violence to food safety threats and even narcotics trafficking. 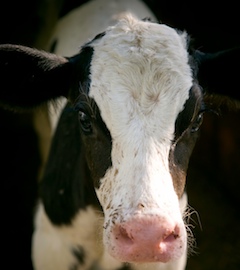 We are all connected, and so are animal issues. And few issues that we are dealing with as a movement today show more linkages than the amendment in the House Farm Bill from U.S. Rep. Steve King.

As I’ve reported in the past, the House Agriculture Committee approved a radical, overreaching amendment from King that would nullify state agriculture laws and regulations that help to prevent cruelty, food safety crises, fires and all manner of other threats. Journalists covering Capitol Hill report that House and Senate Agriculture Committee leaders are turning to the details of the Farm Bill, and whether to keep or nix the King amendment will be one of the hottest topics.

There is an enormous coalition that’s been built to defeat King on this. Today, Ellyn Ferguson of Congressional Quarterly reported that the National Sheriffs’ Association has weighed in against King’s gambit, on top of the prior announcement by the Fraternal Order of Police condemning his folly.

State and local governments, including the National Conference of State Legislators and the Association of County Executives, also want the King amendment stripped. And every animal welfare, consumer, sustainable agriculture, and environmental group paying attention to national policy also wants the Farm Bill clear of any King-type amendment.

Ronnie Cummins, national director of the Organic Consumers Association, put it well, “We find it ironic that Rep. King, a Tea Party conservative who claims to champion states’ rights, would be willing to eviscerate states’ rights to protect the health and safety of their citizens, in order to protect the interests of the big industrial agriculture companies.”

Congress is hurtling toward a government shutdown. But, incredibly, it’s also flirting with an amendment that seeks to unravel federalism and the legal framework putting some restraints on agribusiness. That amendment should have been laughed away from the start, but it is real and we have to meet the challenge from extremists in Congress who think this would be a step forward for our country.