By humaneworld on November 18, 2013 with 0 Comments By Wayne Pacelle

When shareholders want to see movement inside a company they invest in, they sometimes submit shareholder resolutions. For years, animal welfare advocates and organizations like The HSUS have been doing just that, specifically when we want the company to improve its animal-care or animal-purchasing practices. Today, for the first time, a shareholder proposal on an animal welfare topic passed, almost unanimously. That vote is a telling sign of the emerging societal consensus on the extreme confinement of breeding sows in gestation crates. People just don’t like them. 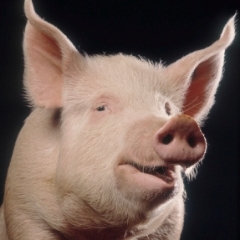 Rather than criticizing a company for not doing something a certain way, the proposal praised Cracker Barrel Old Country Store, the iconic middle-America restaurant chain based with more than 600 outlets, for recently announcing plans to eliminate gestation crates – small cages used to virtually immobilize breeding pigs for months on end – from its pork supply chain.

The fact that virtually 100 percent of Cracker Barrel’s shareholders – from some of the world’s largest banks to individual stockholders – voted to applaud the company for working to address cruelty to farm animals in its supply chain offers further evidence that it is a business imperative for food companies to proactively engage growing social concerns over animal welfare issues. Companies that choose to ignore such issues may fall out of favor with consumers, while those that embrace this kind of positive change win points with them.

The HSUS applauds both Cracker Barrel for working to improve farming conditions in its supply chain and the company’s shareholders for recognizing the value in that work.

P.S. Unfortunately, politicians are often laggards on important social issues. Look at the history of women’s suffrage, civil rights and so many other topics. In New Jersey today, Gov. Chris Christie has, for the moment at least, thwarted our effort to override his veto of the Legislature’s sentiment that it seeks to ban gestation crates. We fell just two votes short of the two-thirds vote needed to override his veto. It appears that Gov. Christie is more focused on appeasing Republican caucus-goers in Iowa than the people of New Jersey, who oppose gestation crates with a 91 percent supermajority. He may have miscalculated attitudes in Iowa, however. Polling from all major pig-producing states, including Iowa, reveals broad-based opposition to immobilizing animals in these crates. We’re not done yet in New Jersey.