By humaneworld on January 22, 2014 with 0 Comments By Wayne Pacelle
5 shares

Since the release in 2009 of the chilling documentary “The Cove,” and thanks to a much-welcomed tweet last week from newly minted U.S. Ambassador Caroline Kennedy condemning the “drive hunt,” the herding and butchering of dolphins in the small inlet in Taiji, Japan is unlikely to go unnoticed.  Last week, fishermen captured and trapped 250 bottlenose dolphins, and they killed 30 of them just yesterday. 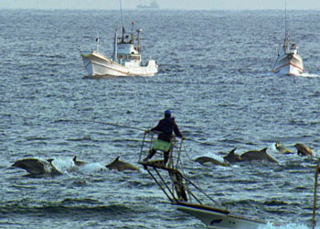 Dolphins in the Cove photo courtesy of the Cove/Participant Media

The drive hunt is barbaric. The fishermen use small motorized boats to locate pods of dolphins and other small whales, and begin herding the animals toward shore, using the noise of the boats’ engines and the banging of pipes underwater. There are reports, too, of the use of underwater explosives. Once the animals are on the shore or in the shallow bay, fishermen then get into the waist-deep water and move through the pods, stabbing animals to death, in full view of the other pod members. These highly intelligent animals are slaughtered for meat, pet food, and fertilizer. The fishermen spare the best specimens and sell them to marine parks, consigning them to a less violent but still grim fate, abducted from their families, never to return to their natural homes, and sentenced to life in concrete tanks.

In the late 1980s, marine parks and aquariums (including U.S. parks) and the U.S. Navy began purchasing live animals from Japan, paying many thousands of dollars for each animal. This contributed to the profit-making of the Taiji hunters. In 1993, a California marine park sought to import several dolphins from Japan, but the U.S. government stipulated that the dolphins could only be imported if they had been captured “humanely.”  Because the capture violated the conditions of the permit, the government prohibited the import. Since then, no dolphins have been imported into the U.S. from Japan.  However, there are other markets and willing buyers to take the animals, mainly in Asia and the Middle East.

A bottlenose dolphin and her calf. Dolphins of all ages are slaughtered in the brutal hunt.
Photo credit: NOAA

In response to all this, there have been global demonstrations, boycotts, congressional resolutions, the global distribution of “The Cove,” and most recently, Ambassador Kennedy’s courageous statement. All the while, Japanese officials have defended the slaughter and capture as their cultural right, retorting that U.S. citizens eat beef and hunt animals for sport. The Taiji hunt, whilst the most notorious, is one of a number of hunts of dolphins and small whales conducted in Japanese waters. In any one year, in combination, these hunts may claim the lives of some 20,000 cetaceans.

But there has been some progress in Japan. A growing number of supermarkets in Japan have stopped selling whale and dolphin meat, including AEON, Ito-Yokado (7-Eleven’s parent corporation), Seiyu, and more. In addition, our supporters have helped us end the sale of dolphin meat on Internet market sites like Amazon and Google. However, Yahoo! Japan continues to sell whale and dolphin meat products.

The government of Japan is ultimately responsible for the killing of these highly intelligent marine mammals, known well to us for their heroic efforts to protect drowning seafarers or to protect swimmers from sharks. We can help repay these creatures for their long-standing, documented record of altruism by continuing to bring pressure on those who profit from this spectacle in Japan.  In the end, we must act together make it plain that it’s only a tiny fraction of people in the world who would exhibit such callousness and cruelty to animals who deserve so much better from our species.