In today’s Bangor Daily News, Maine hunter Joel Gibbs upends the simplistic framing coming from a vocal segment of bear trophy hunters in the Pine Tree State about Question 1 on the November ballot. 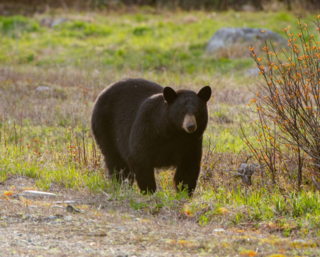 Maine is the only state that allows baiting, hounding and trapping of bears. Photo: Frank Loftus/The HSUS

With Maine’s bear baiting season about to start later this month, the Sportsmen’s Alliance of Maine is attempting, with fear tactics, to rally hunters, warning them that Question 1 bodes the end of bear management in the state.  In fact, Question 1 would only put a stop to certain inhumane and unsporting methods of take already illegal for other big-game species, such as deer and moose – baiting, hounding and snare trapping.

As Gibbs said in his column today, he’s killed nearly two dozen bears during the last quarter century, but has never needed to rely on shooting the animals over a giant barrel full of meat parts and jelly doughnuts, or taken aim at a bear as it clung to a tree limb after being driven there by a pack of dogs with radio transmitters on their collars. And he’d never think of shooting a bear execution style, after catching one in a snare trap.

As a fair chase hunter, Joel Gibbs is not an outlier – he actually is in the mainstream of bear hunting in America. It’s just that Maine somehow fell out of the mainstream, and it’s allowed a relatively small number of guides to turn the north woods into a vast dump site and an unsporting killing ground, mainly for out-of-state trophy hunters intent on making an easy kill to acquire a trophy.

You see, of the 3,000 to 4,000 bears shot in Maine each fall, out-of-state shooters account for more than 60 percent of the killing.  Calling the baiter a “guide” is a stretch. He’s more like a junk-food distributor and bear pointer.  Hundreds of Maine guides collectively put out millions of pounds of food for bears, in order to gain a fee of $1,500 to $3,000 to create a bear-killing opportunity. Then, they tell a seated client to shoot the biggest bear at the dump site.

The HSUS has worked with rank-and-file hunters like Joel Gibbs in Colorado, Oregon, and Washington to ban these practices by citizen initiative, just as Maine voters are proposing to do in November. Maine is the only state that allows baiting, hounding and trapping of bears.

The guides and their allies in the trophy hunting lobby say it’s essential for management, but how can that be if no other state allows all three of these practices? And what is the behavioral and population-wide effect of dumping millions of pounds of food out for bears during a critical period prior to hibernation, especially given that every responsible wildlife management agency says it’s a mistake for humans to feed bears? Doing this grows the bear population, habituates bears to human food sources, and causes bear encounters with people.

In the last 10 years, according to Maine’s own state wildlife agency, the bear population has increased by 30 percent. This has happened even though state wildlife managers have allowed the use of these unsporting and inhumane tactics, which have drawn all of these out-of-state hunters but haven’t even stabilized the bear population. In contrast, in the states that have banned bear baiting and hounding, the bear populations and the number of human-bear conflicts have stabilized, and more people have participated in fair-chase bear hunting, generating greater revenue for those states.

I hope the majority of Maine voters follow the voting recommendation of Joel Gibbs and support Question 1. Even if a majority of bear baiters in Maine don’t take Joel’s voting advice, maybe he can teach them a thing or two about how to hunt bears, in a way that doesn’t stack the odds so badly against the bears and violate the basic precepts of hunting itself.