What if there were a ballot initiative in Maine to ban the death penalty, and staff from the Maine Department of Corrections joined with private citizens to oppose the measure, spent state resources traveling around the state, starred in TV ads with their uniforms on, raised funds and even gave state dollars to support the “no” campaign?  If you were a resident of Maine, would you think that appropriate? 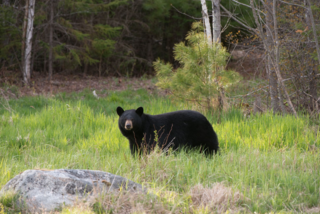 Maine's wildlife agency has a sordid history of interfering with bear protection measures in the state. Photo: Frank Loftus/The HSUS

And what if the agency regulating nuclear power in the state did the same things with a ballot measure to impose stronger regulations on handling nuclear waste, essentially taking over the “No” campaign and using all manner of state resources to influence the outcome?

Well, that’s what the Maine Department of Inland Fisheries and Wildlife (IF&W) is doing right now on a statewide ballot issue dealing with wildlife rules. It is using all manner of state resources to influence an election that seeks to ban certain unsporting and inhumane hunting practices. Question 1, to be decided by voters in November, would ban bait, hounds and traps in killing bears for sport and trophies. Maine is the only state in the nation to allow all three of these practices.

Bear protection advocates, disgusted with this abuse of power and violation of state law, filed suit today to stop the IF&W’s ongoing use of taxpayer money and agency staff time to conduct a coordinated political campaign in opposition to Question 1.

In 1939, Congress originally passed the Hatch Act to prevent the use of federal government resources and activity in election campaigns. Many states adopted similar laws to forbid government agencies from using their resources to get involved in candidate or issue elections.

Indeed, imagine today if the U.S. Department of Homeland Security were allowed to spend government dollars and place uniformed government personnel in ads to defeat Congressional candidates who take views contrary to the political appointees running the agency. Would you think that Big Brother was breathing down your neck?

With long ties to the hunting lobby and the bear baiting industry – and enthusiasts of these forms of hunting on their staff – the IF&W has a sordid history of interfering with bear protection measures in Maine. This same issue was on the ballot a decade ago in the state, and the IF&W carried out a coordinated print and television media campaign opposing the measure. It’s involved again today, except in an even bolder way, and clearly using state resources to influence the election.

This is the only agency in the country that allows bear baiting, hounding and trapping. Essentially, it operates a bear farming program, dumping seven million pounds of junk food into Maine’s woods each year, to grow the bear population and to teach them to seek out human foods. With the deck stacked so badly against the bears, out-of-state hunters need waste little time to get a “guaranteed kill” of a trophy bear, essentially by hunting right on top of a garbage pile.

This political campaign has culminated in a recent television advertisement created by the IF&W, featuring the agency’s employees. The ad not only attacks Question 1’s merits, but also hurls personal attacks at supporters of Question 1 and accuses them of nefarious motives. Bait piles of junk food are set out to attract bears so out-of-state trophy hunters can get a guaranteed kill. Photo: Kathy Milani/The HSUS

The IF&W’s commissioner, Chandler Woodcock, himself launched this campaign in the fall of 2013, when he appeared at an opposition kick-off rally held on the steps of the agency’s headquarters, during business hours. As he stood flanked by uniformed IF&W employees and Question 1 opposition groups, Woodcock encouraged the crowd and assembled media to reject the measure. Woodcock did not confine his statements to science and facts about bears, but rather argued that Question 1 was being advanced by “a group of well-funded, out-of-state activists who are more concerned about advancing their agenda than they are the welfare of our own residents, our traditions, and the natural resources economy.” He also bragged that “ten years ago, this same referendum question, funded by the same national animal rights group was defeated at the ballot box.”

Although IF&W has refused to disclose most of the documents relating to its 2014 campaign activities, documents released so far show that agency officials are operating a partisan political campaign, in their official capacity and often during normal business hours, using the agency’s taxpayer-funded email system. For example:

On July 23, 2014, IF&W biologist Randy Cross initiated an email exchange during work hours with fellow employee Nathan Webb.  In his initial email, Cross proposes an anti-Question 1 argument that he states “[s]eems like the kind of thing that would play well in an opinion type article.” Cross characterizes the argument as “good to have in our arsenal to use as a counterattack.”  The following Thursday morning, Webb emailed that “Judy [Camuso]…thinks it would be good to have a press release on this topic, using whatever data is available to support our position.”

Since then, IF&W officials have produced their own set of opposition videos using agency resources, traveled to opposition fundraisers in government vehicles and given speeches while wearing their official state uniforms. They’ve even launched an extensive attack website, filled with rhetoric and false information concerning Question 1.

As the Maine courts have recognized, agencies can provide a “fair presentation of facts,” but they may not “spend public funds to take sides in elections and attempt to influence results.”

In this case, there is no possible way to explain the agency’s campaign activities as merely providing “fair comment” and factual information to voters, which would be permissible under Maine law. Instead, IF&W and its employees are engaged in the unauthorized use of public funds for campaign activity, the full nature and extent of which is still not known because of IF&W’s failure to respond to document requests.