Today the U.S. Supreme Court heard arguments on the most consequential law ever passed in relation to the treatment of farm animals, California’s Proposition 12. Within that state, it bans the extreme confinement of mother pigs, egg-laying hens and calves raised for veal, and outlaws the sale of pork, eggs and veal from extreme confinement. The HSUS

Today the U.S. Supreme Court heard arguments on the most consequential law ever passed in relation to the treatment of farm animals, California’s Proposition 12. Passed by voters in 2018, Proposition 12 bans the extreme confinement of mother pigs, egg-laying hens and baby calves, and outlaws the sale of pork, eggs and veal sourced from extreme confinement.

More and more companies have responded to increasing public demand for improving the treatment of animals by phasing out the use of cruel confinement methods like gestation crates for pigs and battery cages for hens in their supply chains. But formalizing such public sentiment into law is an enormous step forward for animals, and that’s why Proposition 12 was among several groundbreaking measures to make extreme confinement of farm animals illegal.

Ever since the law passed some meat industry interests have been suing to overturn it, trying to force California to sell cruel and unsafe products that voters didn’t want sold within their state. We’ve been fighting back (and winning) every step of the way, and now that the case has reached the U.S. Supreme Court, we and many others are fighting to support the law to ensure California’s humane law stays intact.

The hearing that happened today is the next key step in a decades-long animal welfare battle. The arguments submitted in support of Proposition 12 have brought together compelling reasons for this commonsense animal welfare and public health law. 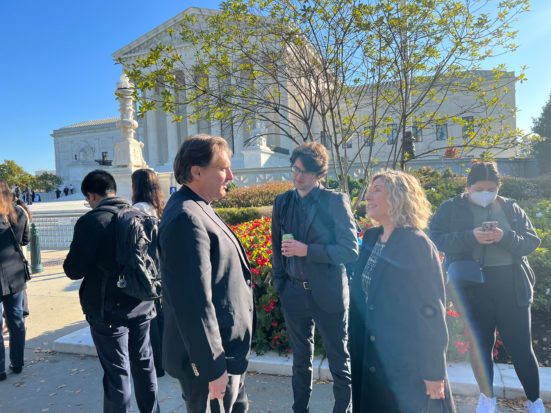 Outside the Supreme Court of the United States, Kitty Block speaks with Chris Green, executive director of the Animal Law and Policy Program at Harvard Law School, on Tuesday, October 11, 2022, when the Court heard arguments on the most consequential law ever passed in relation to the treatment of farm animals, California’s Proposition 12. Meredith Lee/The HSUS

The powerful arguments submitted to the court in support of Proposition 12 came from respected organizations, accomplished legal and veterinary experts and powerful companies—some of which might surprise you. For example, one brief supporting the law came from Perdue Premium Meat Company, Inc., which argues that forward-thinking pork producers are able and eager to meet Proposition 12 standards. In its brief, the company says: “Niman Ranch’s farms have been meeting the Proposition 12 standards and producing humanely raised pork for years. Hormel announced two years ago that it will do so. Even without Proposition 12, the market has shifted to create strong demand for pork that is farmed humanely and without cruelty. Proposition 12 reflects that shift in consumer preferences.”

In another surprising twist, some briefs that weren’t submitted on behalf of our position still underscored points that support upholding Proposition 12. In a brief by professors of agricultural and resource economics at the University of California, Davis, an institution the pork industry frequently relies on for research and expertise, the authors call out the NPPC’s claims about Proposition 12 supposedly being too costly for producers to implement. They conclude: “Not only are [NPPC’s] arguments flawed as a reflection of basic economic incentives, but they are factually implausible.” And while the American Association of Swine Veterinarians submitted a brief largely in support of the NPPC’s position, they even admitted that “there is some evidence that allowing pregnant sows more exercise may offer limited improvements in the health of their offspring.” (It’s worth noting that hundreds of independent veterinarians wrote a brief strongly in support of Proposition 12.)

While some of the written and oral arguments in support of Proposition 12 can seem technical, it’s so important to remember that this is a historic moment in the long fight for animal welfare under the law. All the arguments lead to the conclusion that states may permissibly legislate for the health, safety and morals of their residents. When residents decide that they do not want cruel commodities sold in their state, no one should have the right to force them otherwise. These arguments are testaments to moral values as they have evolved in a culture; we are watching history being made. And the media coverage of this case has been quite moving, too: “We tolerate modern hog farming because we’re kept in ignorance of it,” author Mark Essig wrote in the New York Times earlier this week. “If we had a chance to look pigs in the eye, we might have trouble looking at ourselves in the mirror.”

While we wait for a ruling in the case, which is not expected until spring of next year, we feel confident that we are on the right side of history and that Proposition 12’s standards are consistent with broadly shared values that unite Americans of many persuasions. The law is right, and we’re so proud of being a part of fighting for it alongside all of you.