Lola Webber, director of campaigns to end dog meat at Humane Society International, comforts one of the 18 dogs rescued from a slaughterhouse in Thai Nguyen, Viet Nam. Chau Doan/AP Images for HSI

Something extraordinary happened just outside a dog slaughterhouse and dog meat restaurant in Viet Nam where thousands of dogs and cats had been killed over the past five years: The owner of the facility approached the sign that advertised dog meat and started to tear it down.

The work that led up to this moment has been tremendous. Humane Society International created a program called Models for Change to help people transition out of the dog meat trade. The dog meat business is not only immensely cruel but also dangerous, facilitating the spread of diseases such as rabies, which kills dozens of people each year in Viet Nam. HSI has been successfully operating Models for Change in South Korea since 2015, helping to shutter 17 dog meat farms there and save more than 2,500 dogs.

Dam The Hiep’s slaughterhouse, situated in a province known as a dog meat hotspot in Viet Nam, is the first in the country to take part in the Models for Change program. “I know in my heart that killing and eating dogs is wrong, and it was becoming harder and harder for me to do it,” said Mr. Hiep, who plans to transform his business to selling agricultural supplies such as crop fertilizer, as well as groceries, green tea, beer and snacks.

Eighteen dogs were rescued from the now-shuttered slaughterhouse. Some of the dogs had been locked up in cages for weeks, getting fattened up for slaughter weight. But now a new chapter of their lives is beginning, as they arrive at a nearby temporary care and rehabilitation facility, which is supported by HSI, at the Thai Nguyen University of Agriculture and Forestry, to recover and receive veterinary care. We don’t know exactly how these 18 dogs ended up in the slaughterhouse, but we do know that pet theft is a rampant problem in Viet Nam, which kills more dogs for meat than any other country in Southeast Asia. HSI has found that Viet Nam’s dog meat trade is largely supplied through snatching dogs from the streets or stealing pets from private homes. Traders often use poisoned bait such as meatballs laced with cyanide, and catch the dogs using painful taser guns and pincers. If families are lucky enough to locate their dogs after they are captured, they often try to buy their dogs back.

Even though some of the 18 rescued dogs were visibly traumatized even after they reached the rehabilitation facility, all are now recovering well. Some will undergo treatment for skin issues and diarrhea, and all of them will have the chance to recover from their plight emotionally. This new facility has been equipped with spacious dog runs, comfortable beds, ample toys and a large dog playground—which I’m sure the dogs will make great use of. Once they are ready, the plan is to try to find the dogs adoptive homes locally and in the U.S.

As difficult as it is to even think of the suffering caused by the dog meat trade, I am heartened by our ongoing collaboration with Thai Nguyen University and local authorities who are committed to helping us end this trade. We are dedicated to changing this heartbreaking cycle of pain for dogs and the families who love them, and we hope that this slaughterhouse closure in Viet Nam is the first of many. For these 18 dogs, the dog meat trade has ended. 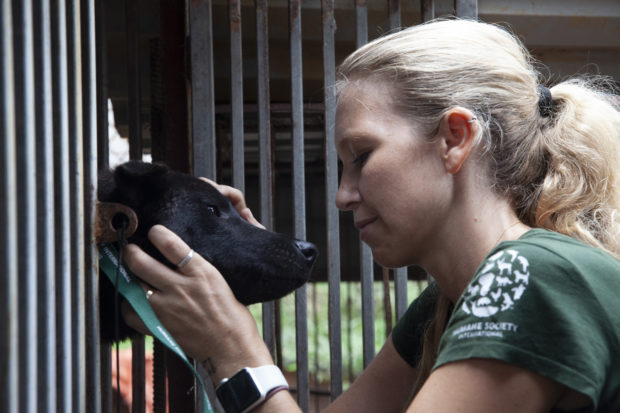 All 18 rescued dogs have now been removed from the cages at the slaughterhouse and are now recovering before being considered for adoption. Chau Doan/AP Images for HSI

You can help support this lifesaving work.