Indiana raid shows why strong laws against cockfighting are essential The Humane Society of the United States assisted the Indiana Gaming Commission with the seizure of 139 roosters and hens from an alleged cockfighting operation in Wells County, Indiana. Meredith Lee/The HSUS

It was clear something awful had been happening at a residence near Fort Wayne, Indiana, just by looking at the ground. As our team assisted law enforcement in a search of the area on Nov. 3, they saw carcasses and body parts of dead animals throughout the property. And in a dilapidated barn, they discovered an apparently bloodstained cockfighting pit, complete with chairs set up for spectators and equipment suspected of being used for treating injured birds so they can continue fighting. Behind the barn, they found a trench strewn with the bodies of dead roosters and hens in various states of decay. A pit found on the scene of a recent raid of an alleged cockfighting ring. Meredith Lee/The HSUS

Our team found 139 roosters, hens and chicks wandering the yard or in makeshift pens and enclosures, some of which were so filthy and dusty it was hard to breathe inside them. The birds found on scene were mostly Asil type chickens—amazing birds who are known for their intelligence and tendency to bond with their caregivers, and who, standing taller than other types of chickens, almost look like little dinosaurs. Some of the birds had abrasions with feather loss on their head, chest or legs.

Cruelty in the name of entertainment

Cockfighting is organized crime centered around horrific animal cruelty. Roosters fitted with razor-sharp blades are forced to fight to the death. They are gored, sliced and have their eyes and lungs punctured while spectators, who have put wagers on their pain and fear, cheer around the edges of the pit. Just like in dogfighting, those who participate in cockfighting events are betting on the animal’s will to survive, at terrible cost, all for the sake of gambling and “entertainment.” A rooster’s natural instinct to protect his flock is exploited by cockfighters with the addition of aggression-enhancing drugs, selective breeding and training. Asil chickens are known for their intelligence and tendency to bond with their caregivers. Meredith Lee/The HSUS

Not only is cockfighting cruel, it’s also bad for our communities, as it is often associated with other criminal activities such as drug trafficking, gang activity and illegal weapon sales. In an instance where reality sounds even stranger and more dramatic than fiction, federal investigations have uncovered international drug cartels running sophisticated cockfighting operations with intricate gambling networks in the U.S., and authorities have also uncovered operations where cockfighting derbies were used to distribute heroin, cocaine, methamphetamine and opioids, and were found to be connected with human trafficking.

Among the many wrongs associated with cockfighting is the risk that diseases can spread through these flocks so easily, which means they can rarely be saved and rehomed after raids such as the recent one in Indiana. Our team transported the animals from the Indiana raid to a safe location where they were examined by an avian veterinarian. Due to the high likelihood of spreading infectious diseases such as avian flu, salmonella, virulent New Castle Disease and campylobacter to humans and other flocks, chickens rescued from cockfighting situations are typically not permitted to be adopted out. This, along with the lack of adequate placement options for roosters, often leaves agencies little choice but euthanasia. Tragically, that was the fate of these birds—at least they will never have to suffer again. A rooster’s instinct to protect his flock is exploited by cockfighters, who often further aggravate the roosters with drugs and training. Meredith Lee/The HSUS

To make matters worse, children are often present at these events. Witnessing innocent creatures thrown together in a ring where they are forced to fight to the death is inherently damaging, as it perpetuates the idea that such violence and disregard for life is normal.

Many people—even animal advocates—do not know cockfighting still occurs and how prevalent it is in some parts of the country. Given its illicit nature, it can be hard to know exactly how frequently cockfighting takes place, but the U.S. Department of Agriculture estimates that as many as 150,000 people own gamefowl, and as many as 24 million birds may be involved in such operations in the U.S. alone.

Putting an end to cockfighting

It’s a sign of progress that we were called in to assist with this raid, and cockfighting is a felony level crime in Indiana. We’re honored to partner with the Indiana Gaming Commission to help put a stop to suspected cockfighting rings like this one. But more could be done to prevent cockfighting in the first place. Even despite its being a federal felony, a state felony in 42 states and D.C., and a misdemeanor in eight states, cockfighting continues. Strong laws and their enforcement are necessary to shut down illegal cockfighting operations. We need to stop the cycle of violence and crime that impacts hundreds of thousands of animals worldwide and the communities in which this crime persists. For instance, we are working on a bill in Indiana that would strengthen the animal fighting law by prohibiting the manufacture, sale, possession and use of animal fighting paraphernalia such as gaffs, which are tied to the birds’ legs to increase bloodletting, and treadmills, which are used to condition dogs. 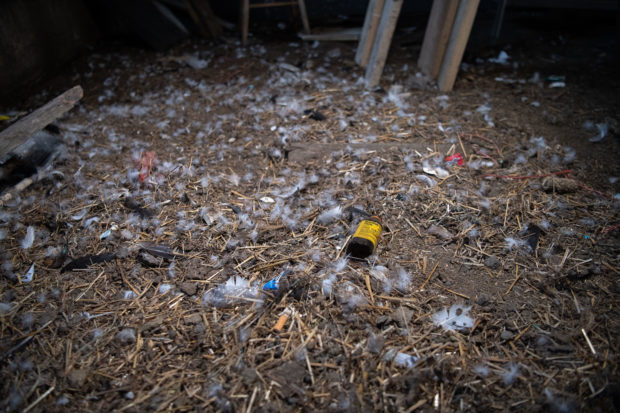 Strewn feathers and cigarette butts were found at the site of an alleged cockfighting operation in Fort Wayne, Indiana. Meredith Lee/The HSUS

We are advocating for legislation in the remaining 11 states that don’t have laws prohibiting the possession, training or sale of birds for fighting. In both the U.S. and internationally, the sale of birds for fighting is big business. It is not uncommon for gamefowl breeders to make hundreds of thousands of dollars from their criminal gamefowl breeding operations, often using the U.S. Postal Service to illegally ship birds.

We are focusing on many states across the Southeast—such as Kentucky, North Carolina and Georgia—encompassing what federal drug enforcement authorities call the nation’s “cockfighting corridor.” Georgia is also a priority for us because it is the only state without a specific law against cockfighting.

Amazingly enough, defending laws that crack down on such cruelty isn’t as easy as we’d hope. In Oklahoma, cockfighters have formed a political action committee to roll back meaningful penalties for all cockfighting-related activities; the PAC has contributed nearly $40,000 to Oklahoma state and federal candidates during the 2022 elections. We prevented three attempts to weaken the state cockfighting law this year, but the cockfighters were in the Oklahoma state capitol lobbying legislators as hard as we were, and we know they’ll be back next year.

Just this year, the USDA’s Office of Inspector General brought notorious animal fighters in four states to justice: “Chicken Joe” in California, operators of three large cockfighting venues in Georgia, seven members of the Easterling family in Alabama, and 17 Kentuckians. The indictments included cockfighting, selling and training birds for fighting and attempted bribery of a sheriff. Some of the arenas had paid employees, stadium-style seating and heavy security. This is an example of why strong laws should apply to all participants who profit from or encourage illegal animal cruelty.

Laws only work with strong enforcement, which is why our Law Enforcement Training Center has trained thousands of officers nationwide on how to investigate animal crimes, including cockfighting. We are also partnering with human trafficking task forces to train officers on the strong connection between animal fighting and organized crime, often in the form of “forced servitude” when a person cannot pay their gambling debts.

You can help stop cockfighting in your community by knowing how to identify the signs of animal fighting. You can also raise awareness about cockfighting by sharing this story and by calling or emailing your state elected officials to ask them to support stronger animal fighting laws.